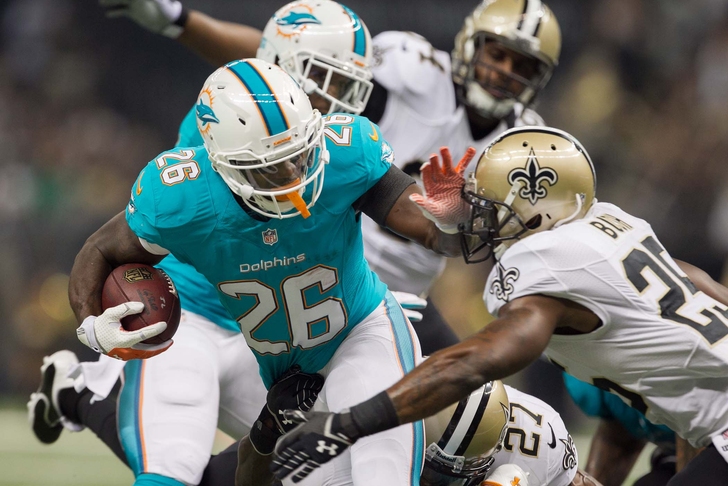 The Miami Dolphins had several quality fantasy football players last season, yet are being undervalued this season. The Dolphins were one of three teams with a Top 10 QB and a RB last season. On top of that, they've upgraded at WR and TE.

You want an undervalued sleeper? Look no further than Ryan Tannehill. He finished eighth among fantasy QBs last year, has a healthier offensive line and more weapons. And yet, he's the 13th drafted quarterback on average this year. If you're like me and prefer to wait for QBs, Tannehill presents tremendous value and upside.

Miller finished eighth among fantasy RBs last season, yet is the 18th RB off the board on average. I don't think he produces another Top 10 season, but he's worth drafting as a high-end RB2. The biggest worry with Miller isn't his backups (the Dolphins don't have much), but injury.

A fifth round pick out of Boise State, Ajayi has a chance to be Miller's top backup. He has limited value unless Miller goes down.

Formerly at Oklahoma, Williams will battle with Ajayi for backup duties. Like Ajayi, he only has value if Miller gets hurt.

With Mike Wallace and Brian Hartline elsewhere, Landry should be the No. 1 option in Miami. He's got WR2 potential, but is being drafted like a WR3 or WR4.

Stills will help Tannehill, but I don't think Stills will produce quite as well as he did last year. Still, there is some upside and he's worth taking a chance on late.

Parker isn't quite ready for a big fantasy impact, but he could be in a year or two. After all, he was a Top 15 pick for a reason.

I'm expecting a drop in production for Jennings, as he just shouldn't get as many targets as last year. His fantasy upside isn't that high either.

Cameron is only a few years removed from a Pro Bowl season. Going from Cleveland to Miami is a massive boost for him. If you can't get Gronk, don't be afraid to wait for someone like Cameron.

Keep it here for all your Fantasy Football needs and Miami Dolphins news.