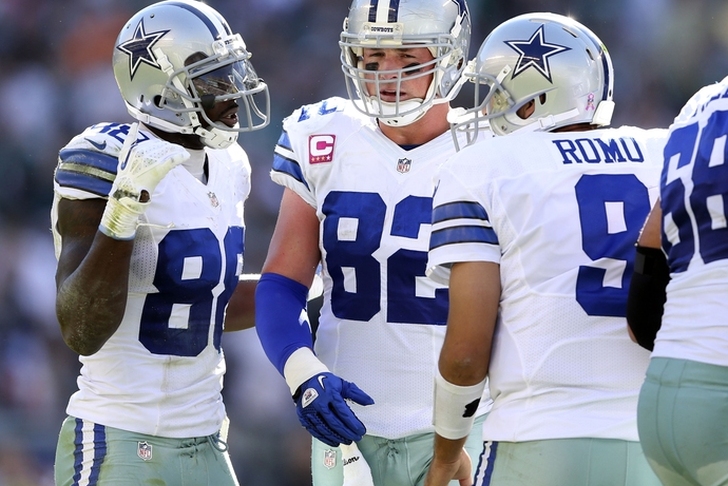 The Dallas Cowboys are in the midst of a Super Bowl window, even if it's not a very large one. That window comes from a talented offense and one of the best offensive lines in the NFL. As a result, the Fantasy Football upside of the Dallas Cowboys is quite high. Tony Romo and Jason Witten are consistently around the Top 10 at their positions. Dez Bryant is one of the best WRs in the NFL. DeMarco Murray is gone, but because the Cowboys' line is so good, Murray's replacement could have a nice season.

Romo may be aging, but he consistently puts up seasons around the Top 10 among QBs. With Murray gone, Dallas might throw it more than last year. If you like to wait to take a QB, a player like Romo is a smart pick.

Someone will need to take the majority of Murray's carries, and it might be Randle. I'd prefer to wait to see Randle in some preseason games, but I suspect he'll be the starter for Dallas. He's worth taking as a low-end RB2, if he is the starter. His ceiling this year is an RB1, but his floor is sitting on the waiver wire.

McFadden is talented, but can't stay healthy. The upside is high, but if McFadden can't stay healthy, Randle has a great chance to capitalize. The McFadden-Randle training camp battle should be one of the better ones this season.

Dunbar is stuck behind both McFadden and Randle, but has some intrigue in PPR leagues. I wouldn't be surprised if he's the Cowboys' third down back. He's too small to be anything more than that though.

Dez finished third among fantasy WRs last year, thanks to 16 TD catches. I don't think he finds the end zone quite as often this year, but I think he'll get enough yards to help offset any drop in TDs. He's worth a late first or early second round pick.

Williams is the third option in Dallas, stuck behind Bryant and Jason Witten. He had some big games last year, but needs to develop some consistency. That could happen in his third year. He's worth taking a late round pick on.

Beasley is a classic undersized slot WR. His standard league value is limited, but he has some value in PPR leagues.

Witten is the definition of consistent. Last year was actually his worst fantasy football season, but he still finished in the Top 10 among fantasy TEs. If you're looking for a safe pick at TE, Witten is your man. I think he improves on his numbers from last year.

Keep it locked here for all your Fantasy Football needs and Dallas Cowboys news.