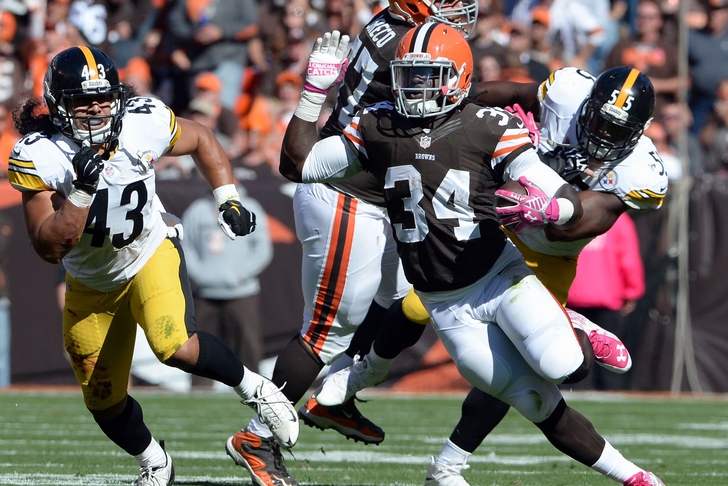 Oh boy. The Cleveland Browns are not exactly a bastion of fantasy football success. Let's start with the positives. The Browns have three options at running back that have potential. However, they should all eat into each other's carries, limiting their value. Unless Johnny Manziel suddenly figures out how to be an NFL QB, the Browns have no fantasy upside at QB. With Josh Gordon out for the season, the fantasy options at WR are thin.

If Manziel ever finds a way to figure it out, he's got some fantasy upside because of his running ability. Still, there is absolutely no reason to invest anything in Manziel right now.

If the Browns weren't operating the dreaded running back-by-committee, Crowell could be a high-end RB2. Instead, he's an RB3 or RB4. He finished 27th among RBs last year, but did rely heavily on touchdowns. He should get more touches, but the committee approach ruins his value.

A third round pick from the University of Miami, Johnson is the most versatile back in Cleveland. He's another player who could sneak into the RB2 range if the Browns weren't splitting carries. He could get a boost in PPR leagues.

There has to be a third back in Cleveland and it looks like West drew the short straw. He's stuck behind Crowell on the depth chart and doesn't offer enough in the passing game to pass Johnson. He could be a serviceable RB2 or RB3 if he was the starter, but he's more like an RB5. Unless someone gets hurt, West offers limited upside.

Bowe checked in at 62nd among fantasy wide outs last season. He failed to catch a TD pass from Alex Smith and now will try to catch them from Josh McCown/Johnny Manziel. That's a substantial downgrade. On the bright side, someone will have to catch passes and Bowe is the most talented WR. Still, he offers limited upside as a fantasy backup.

Hawkins was 50th among fantasy WRs last year, but I'd be surprised if he matched those numbers. With Bowe and Brian Hartline now on the team, Hawkins' targets should drop. Still, he's a solid option in PPR leagues.

Hartline was 80th among fantasy WRs last year. Moving from Miami to Cleveland, there isn't much reason to expect a jump in his numbers.

Housler came over from Arizona after Jordan Cameron left for Miami. Housler has just one career touchdown. He'll finally get the chance to be the full-time starter, but he's not worth drafting in any fantasy league.

Keep it here for all your Fantasy Football needs and Cleveland Browns news.