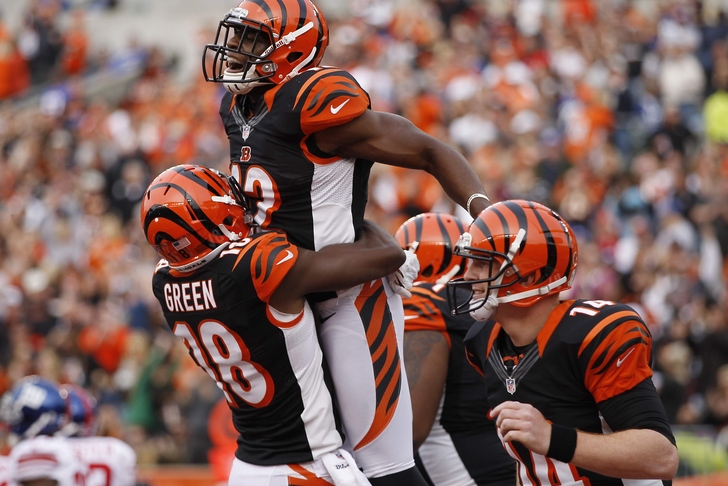 The Cincinnati Bengals didn't make many changes on offense from a personnel standpoint, but are hoping for health seasons from some key players. WR A.J. Green, WR Marvin Jones and TE Tyler Eifert all missed substantial time last year. The Bengals' ground game was strong last season and it should be again this year. Cincinnati will do everything it can to make life easy on Andy Dalton.

The Bengals are trying to make things as easy as possible on Dalton. That means short, quick passes designed to get the ball out of Dalton's hand. That also means Dalton's fantasy upside is limited. He'll put together a few big games, but will also have a few clunkers. He was 19th among fantasy QB last season and there isn't much reason to expect a big jump.

Big things were expected from Giovani Bernard last season, but it ended up being Jeremy Hill who had the big season. Hill averaged less than 30 rushing yards per game in the first two months of the season, but averaged more than 100 from that point on. He's a durable, between-the-tackles back who can handle a full workload. He ended up 10th among fantasy RBs last season. There's always the risk of a sophomore slump, but Hill is worth consideration at the end of Round 1.

Despite Hill cutting into his workload, Bernard still finished in the Top 20 of fantasy RBs last season. He's a bit too small to be an every-down back, but the Bengals should still find ways to get him the ball. He's a solid pass-catcher out of the backfield and has added value in PPR leagues.

Green had his worst fantasy season last year, missing several games with injuries. The missed time dropped Green outside the Top 20 of fantasy WRs. When healthy, Green has consistently been a Top 10 fantasy wide out. He should have a return to form this season.

Jones missed all of 2014 with a foot injury, but is expected to be the No. 2 wide out this year. He played all of 2013 and ranked 20th among fantasy WRs that year, due to several huge games. He's a wildcard, but has upside this year. Spending a late-round pick on a player with upside like Jones could pay dividends.

Sanu was 34th last season among WRs, but a healthy Green and Jones will result in fewer targets. He's worth monitoring in case Jones/Green go down again, but he's not worth a draft pick.

Another player who is hoping to stay health this season. The Bengals spent a first round pick on Eifert and are banking on him capitalizing on his potential. Last year's starter was Jermaine Gresham, who finished in the Top 25 among TEs last year. Gresham is gone now, and if Eifert can stay healthy, he can easily eclipse Gresham's production.

Keep it here for all your Fantasy Football needs and Cincinnati Bengals news.