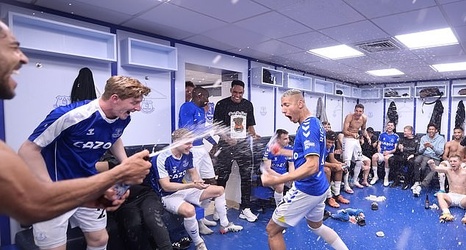 The party went from the pitch to the dressing room at Goodison Park on Thursday night after Everton's dramatic 3-2 fightback against Crystal Palace secured their Premier League status.

Palace surged into a 2-0 lead in the first half before an epic comeback was sparked by a Michael Keane goal, before Richarlison equalised and Dominic Calvert-Lewin got the winner five minutes from full-time.

After ecstatic Toffees fans invaded the pitch, Frank Lampard's men eventually headed back to the dressing room to carry the party on and toast another season in the Premier League.