From despair to delirium! Super-sub Edinson Cavani's double helps Manchester United fight back from TWO goals down to snatch a win in the last minute against Southampton 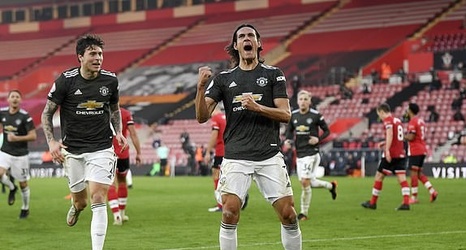 They move in strange waves, this lot. Up and down they go, rising and falling, flying and dying, sometimes both in the space of one game, which is what happened here. The two sides of Manchester United’s complex personality, neatly packaged in one absurd win.

For 45 minutes, they played pretty well and walked off at 2-0 down, beaten by their baffling failure to grasp the obvious risks that come with conceding set-pieces to James Ward-Prowse.

For the next 45, they dominated one of the most impressive sides in the division, scored three through the combination of Bruno Fernandes and Edinson Cavani, and threatened even more.