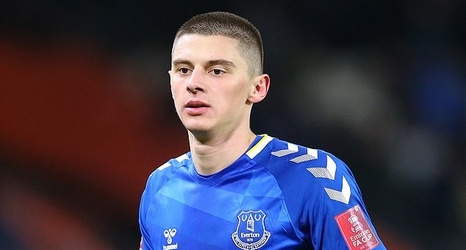 Vitaliy Mykolenko has criticised the Russian national team for their silence since Vladimir Putin ordered the invasion of Ukraine.

Russia invaded Ukraine on Thursday in what it called a special operation to demilitarise and 'denazify' the country - a justification dismissed by Kyiv and the West as propaganda.

The Premier League showed their support for Ukraine at the weekend, with Mykolenko and Oleksandr Zinchenko - who among their team-mates walked out with Ukraine flags draped around them - embraced prior to Saturday's Premier League match between Everton and Manchester City.

But now just like his fellow Ukrainian left-back Zinchenko - who launched an attack on Putin last week on Instagram - Mykolenko has now spoken out against his Russian counterparts.