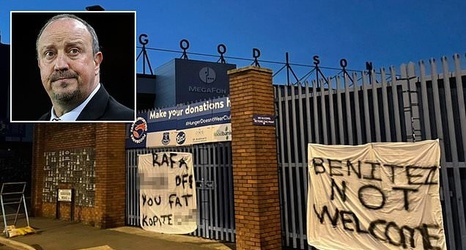 Angry Everton fans have hung anti-Rafael Benitez banners outside Goodison Park in protest at the Spaniard's talks to take over as manager.

The legendary Liverpool manager, who famously won the Champions League during his six years in charge, is still worshipped at Anfield.

And his connection to the Reds means swathes of Everton supporters are furious at the prospect of the 61-year-old taking over on the blue side of the city.

On Thursday night, banners were seen outside Goodison with a clear message that fans do not want Benitez.