Everton 'add former Lyon boss Rudi Garcia' to their list of candidates to replace Carlo Ancelotti... but the Frenchman faces competition from Rafa Benitez and Manuel Pellegrini to land the Goodison Park job 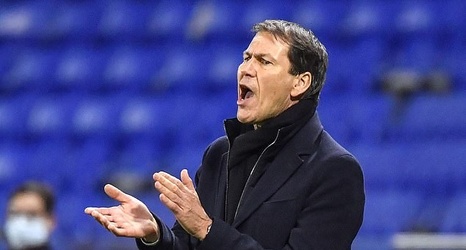 The Toffees have now spent over a week trying to find a replacement for the veteran Italian manager, who jumped ship to former club Real Madrid after 18 months in charge at Goodison Park.

Garcia, meanwhile, left Lyon at the end of the season just finished after guiding the Ligue 1 side to fourth in the French top-flight, thereby just missing out on the Champions League spots.

And according to L'Equipe, Everton have made contact with Garcia about the vacancy but negotiations are still at an early stage.