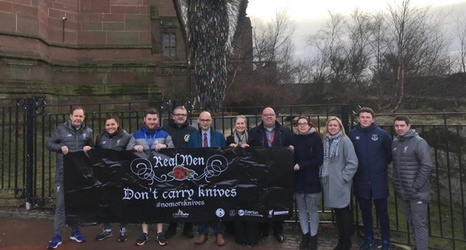 Everton Football Club and its official charity Everton in the Community will be hosting a week of knife crime awareness in the lead-up to Christmas after helping bring the Knife Angel to the city of Liverpool.

The famous Knife Angel was brought to Liverpool at the end of November thanks to a collaborative effort from The Regenda Group, Merseyside Police, Everton in the Community (EitC), Royal Liverpool and Liverpool Cathedral – all in the hope of highlighting the impact of knife crime.

EitC has been working on the ‘Real Men Don’t Carry Knives’ campaign in the last year to raise awareness around knife crime and its consequences, among a number of other initiatives.