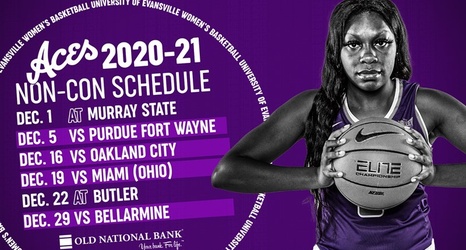 EVANSVILLE - The University of Evansville women's basketball team has released its six-game non-conference slate for the 2020-21 season.

After 269 days without a contest, the Aces return to the floor on December 1 for the first time since a March 7 matchup with Bradley.

Evansville opens up the 2020-21 campaign on the road at Murray State as the Aces look to avenge a narrow 61-59 loss to the Races a season ago.

The first game for the Aces inside Meeks Family Fieldhouse is December 5 against Purdue Fort Wayne as Evansville begins a three-game home-stand.