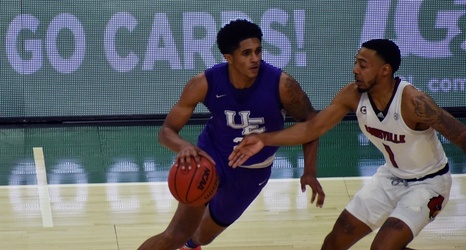 LOUISVILLE, Ky. – The long wait finally came to an end on Wednesday when the University of Evansville men's basketball team took to the hardwood against the University of Louisville inside the KFC Yum! Center.

Louisville (1-0) set an early tone, holding UE (0-1) to 1-of-13 to begin the game before finishing the day with a 79-44 victory. Today's contest saw an Evansville squad with six newcomers face its first live action against opposing competition since March. With the cancellation of exhibition play, the Purple Aces were excited to return to the floor at the Wade Houston Tipoff Classic.