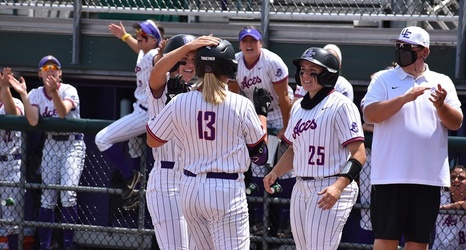 EVANSVILLE, Ind. – Conference championship seeding is on the line this weekend when the University of Evansville softball team wraps up the regular season with a 3-game series at Missouri State. The weekend begins on Friday with a 12 p.m. doubleheader before a single game on Saturday at 11 a.m. - ESPN3 will have the broadcast for all three games.

Last Time Out
- The Purple Aces put together one of their best weekends of the season, earning a 3-game sweep in the final regular season home series against Bradley
- After opening with a 6-4 win, UE finished the doubleheader with a 10-4 triumph; Sunday's finale saw the Aces complete the sweep with an impressive 11-1 victory
- In Saturday's DH, Haley Woolf belted three home runs and accumulated a total of nine RBI; she opened the series with a grand slam in the first inning on her way to being named the MVC Player of the Week
- Izzy Vetter tossed the first no-hitter of her UE career on Sunday to lead the Aces to the 3-game sweep

Player of the Week
- An unbelievable day saw Haley Woolf hit three home runs in the doubleheader on Saturday on her way to the first MVC Player of the Week honor of her career
- Entering the weekend, Woolf's season numbers stood at two home runs, 11 RBI and nine runs scored but in the three games versus the Braves, Woolf hit three homers while accumulating nine RBI and six runs
- Woolf has started to come alive offensively, picking up a hit in each of the last five games and seven out of eight contests since April 18
- Since that time, she has seen her average rise from .