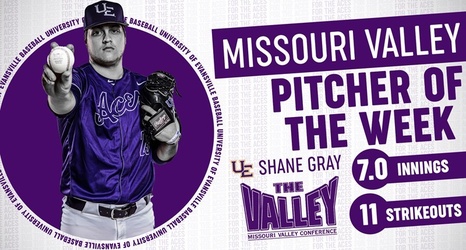 EVANSVILLE - After another solid performance on the mound, University of Evansville baseball sophomore Shane Gray has been named Missouri Valley Conference Pitcher of the Week, it was announced by the Conference office on Monday afternoon.

Another stellar performance on the mound from sophomore Shane Gray helped the Aces earn a series-opening victory over Bradley. Gray pitched seven innings, allowing just one run, and recording a career-best 11 strikeouts in a 5-3 Evansville win. On the season, Gray has compiled 51 strikeouts, the third-best total in the MVC.

The MVC Pitcher of the Week honor is Gray's second of the season after earning the initial award to open the season on February 21.