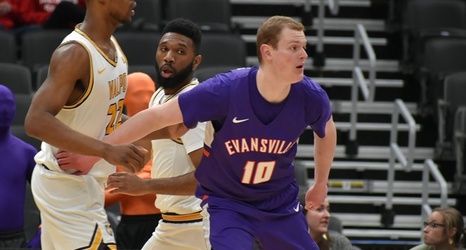 EVANSVILLE, Ind. – A total of 265 days will have gone by since the last time the University of Evansville men's basketball team took to the floor, but the wait is finally over as the Purple Aces open the 2020-21 season on Wednesday afternoon against the University of Louisville in the opening game of the Wade Houston Tipoff Classic. The ACC Network will have full coverage of the contest, which gets underway at 3 p.m. CT. UE continues play in the tournament on Friday with a noon CT game against Prairie View A&M.

Season Openers
- Wednesday will tip off the 102nd season of Aces basketball
- In 101 previous season openers, the Aces are 67-34, including a 79-75 win over Ball State last season at the Ford Center
- UE is in search of its first season-opening road win since a 63-51 win over Western Michigan in 1994
- Since then, the Aces have opened the season on the road just four times, dropping each contest
- The 2016 opener pitted the Aces against the Cardinals inside the KFC Yum!