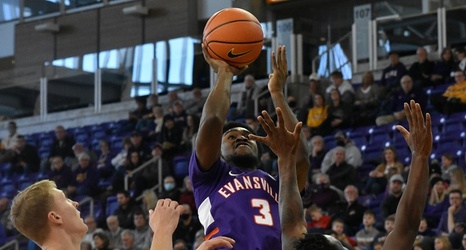 EVANSVILLE, Ind. – Another road game is on tap for the University of Evansville men's basketball team with the Purple Aces heading to Terre Haute for a 6 p.m. CT game against Indiana State on Wednesday evening at the Hulman Center. ESPN+ and the Purple Aces Radio Network will have the coverage.

Season Update
- After two cancellations due to COVID, UE played its first game in 25 days on January 2 at UNI
- The Purple Aces played 12 games over the course of 30 days to open the year, but went 25 days in between the 12/8 game at SEMO and the 1/2 contest at UNI

Last Time Out
- Making his first UE start, Blaise Beauchamp scored a team-high 14 points in an 83-61 loss at UNI on Sunday
- Beauchamp's career game saw him knock down four triples while playing his top total of over 28 minutes.