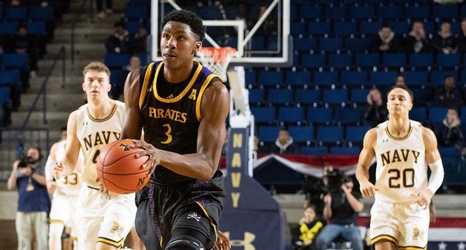 The East Carolina University (1-1, 0-0 AAC) men’s basketball team had three players score in double-digits on Friday night in Annapolis, Maryland, but allowed the United States Naval Academy (1-1, 0-0 Patriot) to battle back in the second half to win 62-57.

With so much turnover on the Pirates’ roster from last season, many of the storylines during the summer was how they would play as a group. In the season opener, head coach Joe Dooley’s squad looked sound, scoring 80 points against the Virginia Military Institute (0-2, 0-0 SoCo) in a double-digit win.

At home, the Pirates turned the ball over 13 times, with freshman guard Tristen Newton playing 34 minutes without coughing the ball up while adding 20 points.