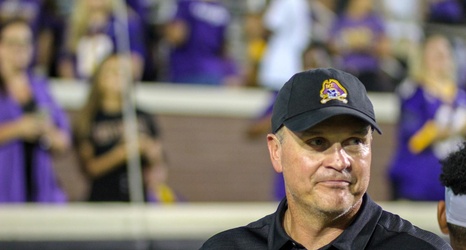 Mike Houston was announced as the 22nd head football coach of East Carolina University on Dec. 4, 2018. His first season at ECU marks his ninth year as a collegiate head coach after three successful seasons at James Madison University.

As the Dukes’ head coach, Houston led JMU to the 2016 FCS Championship and racked up back-to-back 14-1 campaigns. Overall, he posted a 37-6 ledger while at James Madison, solidifying his 80-25 all-time record at the helm of college football programs.

With a National Championship title under his belt, Houston did something on Saturday he has never done before, coach without his father watching.