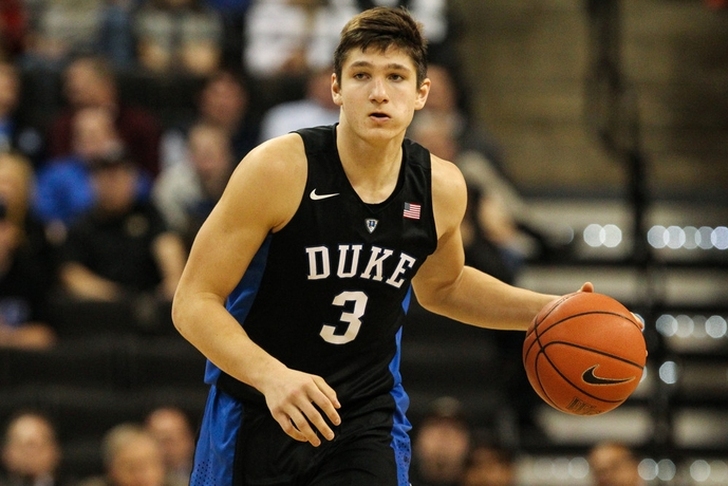 The Duke Blue Devils enter the new college basketball season as the preseason No. 1 team and the favorite to win the national championship. Duke's high expectations are largely due to the nation's top incoming recruiting class, as four of the top 15 freshmen in the country are donning Blue Devils jerseys this season. However, junior guard Grayson Allen has cemented himself as the leader of this team - and he's poised to show that he's the best player in America. Here's why Allen will win the Wooden Award as national player of the year this season:

4) Scoring prowess
Allen is a versatile player who flashed his all-around game last season with 4.6 rebounds, 3.5 assists and 1.3 steals per game, but it's his scoring ability that makes him a special player. After being buried on the bench as a freshman on Duke's national championship team, Allen broke out in a big way, finishing 15th in the country and second in the ACC in scoring with 21.6 points per game. He is an excellent shooter (41.7 percent from three-point range) capable of creating his own shot, but he also proved to be very good at attacking the rim off the dribble. Allen will use both of those skills to be one of the country's top scorers again.

3) Team success
While it goes without saying that individual greatness is required to win the Wooden Award, team success also plays a major role in determining the winner. Only two of the last 11 winners (Jimmer Fredette - BYU, Kevin Durant - Texas) have played on teams that did not finish the regular season ranked in the top 20, and eight of those winners had their teams finish in the top 10. With Duke projected to be one of the top team's in the country all season long (they'll likely be favored in every game they play this season), Allen will certainly be at the center of the national spotlight.

2) Experience
Throughout the 40 year history of the Wooden Award, only two freshmen (Durant, Anthony Davis - Kentucky) have won the award. Furthermore, 32 of the winners have been upperclassmen. Even though college basketball has become more and more dominated by freshmen in the one-and-done era, the national player of the year almost always goes to one of the sport's experienced stars. Since Allen, who is entering his junior year, led Duke in scoring last season, he is one of the few veteran stars on the college basketball scene. That gives him a big advantage in this race.

1) Multiple chances for signature moments
Every Wooden Award winner has had some kind of moment or signature thing about their season that helped propel them towards winning the award. For Buddy Hield last year, it was his 46-point performance at Kansas. For Doug McDermott at Creighton, it was moving up college basketball's all-time scoring list (he's fifth with 3,150 points). Jimmer Fredette had "Jimmer Range!"

Duke's schedule gives Allen plenty of high-profile games where, like Hield, he has a chance to make his mark. Early-season matchups against Kansas (Nov. 15 - Champions Classic) and Michigan State (Nov. 29 - ACC/Big Ten Challenge) give Allen two chances to grab the national spotlight early, then will have plenty of chances in ACC play (five teams ranked in the top 20) - including those two games against North Carolina - to make his mark. If he can deliver a special performance or two in those games, he'll become the favorite.