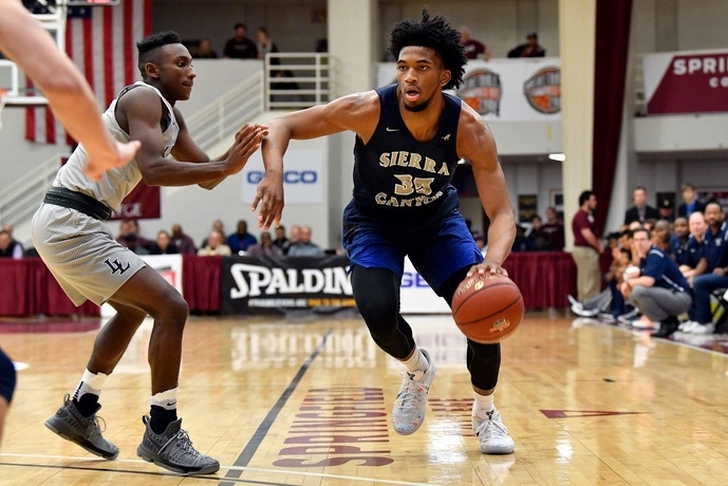 News broke last week that Marvin Bagley III (Tempe, AZ), the top overall prospect in the 2018 recruiting class, is contemplating reclassifying to the 2017 class to play his college basketball this season. The thinking behind the decision (should he make it) is to allow him to get to the NBA one year sooner, where he would jump both Michael Porter Jr. and Luka Doncic as the projected No. 1 pick in next year's draft.

It's easy to see Bagley's potential. At 6-foot-11 and 210 lbs., he is an extremely versatile forward who can handle the ball and attack the rim like a guard while having the rebounding and shot-blocking abilities of a true big man. Those skills, coupled with his fluid athleticism, allowed him to average 25.8 points, 14.9 rebounds and 3.7 blocks per game in Nike's Elite Youth Basketball League in the spring.

No final decision has been made on Bagley's reclassification (his academic standing would allow him to graduate high school early), and his family isn't saying anything about it.

If he stays in the 2018 class, every big-time program is in the running for him, including Kentucky, Kansas and UCLA. However, if he reclassifies, Bagley's list will be trimmed to Arizona, Duke and USC - with the Blue Devils and Trojans being locked in a neck-and-neck showdown, according to Jerry Meyer of 247sports:

Bagley is scheduled to visit Duke and Coach K and staff have been doggedly tracking him. But the buzz is that hometown USC could be his desired destination as a potential 2017 recruit. Andy Enfield has been a familiar face at his games, but so have John Calipari and Sean Miller. In the end, though, Bagley's recruitment has the feel of a Duke and USC showdown.

For the Blue Devils, it's a showdown that they simply have to win. I rank the Trojans as a top 10 team entering next season and they would join Kentucky, Kansas, Michigan State and Arizona as the five legitimate national championship contenders. Should Arizona get Bagley, they will be the consensus No. 1 team in the polls.

As such, Duke has the most to win or lose by Bagley's commitment. With him, they enter that group of legitimate title contenders, which is where the program expects to be every year. However, without him, the Blue Devils have no chance of winning a championship - even though they're ranked in the top 10 in virtually every other preseason poll.

Duke has a lot of holes with their current roster. Marques Bolden and incoming freshman Wendell Carter Jr. (No. 4 overall prospect) are Duke's only players over 6-foot-7 that are expected to be in the rotation - not a great situation to be in - and they lack skill on the wing.

The Blue Devils are going to be forced to play a lot of small lineups next year. Freshman Trevon Duval (the No. 5 overall prospect in the country) and star senior Grayson Allen will be this team's stars, but they are just two of the several combo guars that will make up the vast majority of Duke's rotation. Freshman Gary Trent Jr. (also a combo guard) will likely to start at small forward and may be forced to spend some time at the four spot because of their lack of overall size.

Freshman Jordan Tucker and sophomore Jack White are the only players listed at small forward on Duke's roster, making them prime candidates to fill the second forward position next to Bolden or Carter in a three-guard lineup. The problem is that neither can do it well.

Mike Krzyzewski and the coaching staff  knew this was a problem, which is why they were scrambling to sign Tucker this spring. The Blue Devils didn't offer him a scholarship until previous target Kevin Knox committed to Kentucky in May, showing how they're not exactly the highest on him.

Though he is an excellent shooter who can create his own shot, at 207 lbs., he isn't overly athletic, is not a great defender and is worthless on defense around the rim. He's not the answer, but neither is White, who appeared in just eight games last season.

Duke could try to fix this problem by playing Carter and Bolden together, but that would only create even more issues.

Carter will likely start every game this season due to his post skills and upside, giving the Blue Devils an inside presence on the glass. That said, I'm not convinced he's a great fit for the style Duke will play with a smaller roster. He fits a need, yes, but he's not overly athletic and does most of his damage in the half-court - something small teams don't spend much time operating in. And, as we saw last year, Bolden wasn't in shape or athletic enough to play with a lineup full of guards.

That means we shouldn't expect either of these two players to be game-changers.

Another problem that will be plaguing this Duke team is depth. Duval, Allen, Trent Jr., Tucker, Bolden and Carter Jr. are the only players that are comfortably in the rotation. Four-star freshman Alex O'Connell may see a minimal role, but he's a four-year player that needs time to develop and adjust to the college game. Three-star Jordan Goldwire isn't expected to play much this year either, if at all. White and 6-10 sophomore Javin DeLaurier are the only other viable options, but they combined to play just 21 games last year in strictly mop-up duty.

Krzyzewski has demonstrated in the past that he's wiling to go with an incredibly short rotation and will only play the players he trusts. A short six- or seven-man rotation is certainly likely at the moment, giving the Blue Devils will have one of the weakest benches in the country.

That's where Bagley comes into play. On top of adding an absurdly talented player, Duke would be fixing all of their problems - quality wing play, depth, etc. - in one swoop.

Coach K has to convince Bagley, who is visiting Duke this weekend, that the Blue Devils are the only team that can turn him into a pro-ready prospect one year early. He has shown that he knows how to get one-and-done players ready for the NBA, producing seven of them in the last four years.

USC hasn't produced a one-and-done prospect since DeMar DeRozan in 2009. Arizona has only produced four since 2008.

Duke may seem like the best option in that aspect. Now it's on Coach K to convince Bagley of that - the Blue Devils' season likely depends on it.