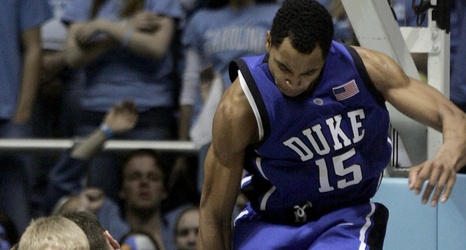 The most impressive thing about the Duke-UNC rivalry is that, despite the tensions, for the most part things stay pretty level between the players.

Not to say there haven’t been moments. The classic moment was the 1961 brawl between Art Heyman (mostly) and UNC.

Heyman was buried under Tar Heels and at some point, when he got free, he claims he slugged Frank McGuire in the nuts. Years later, he gleefully said that he ran into McGuire and he said, “it still hurts, Artie.”

There were major repercussions from that, both for the rest of the season and for the intensity of the Duke-UNC rivalry, which went thermonuclear.