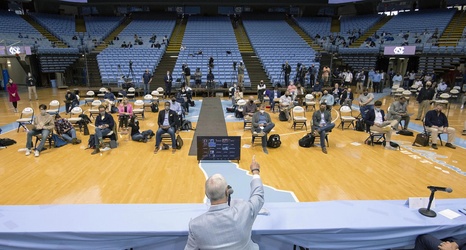 Duke fans have had a long relationship with Roy Williams. He took over Kansas after Larry Brown left the program in shambles in 1988 and had the Jayhawks in the title game in 1991, losing to the Blue Devils.

Duke and Kansas played a few times while he was coach with Duke winning three of those four games and also 18 of 22 ACC games against his Tar Heels.

After Dean Smith died, the Duke and UNC players took a knee in Cameron and led a moment of silence for the late UNC coach with Williams and Duke’s Mike Krzyzewski leading them.