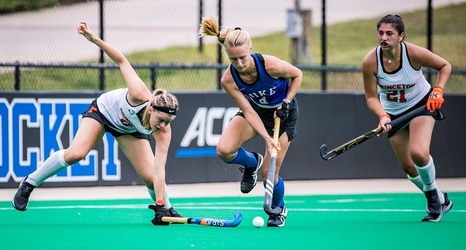 DURHAM, N.C. - Despite breaking open the scoring with a four-goal second quarter, Duke was unable to fend off 12th-ranked Princeton as the Blue Devils fell, 5-4, in overtime Sunday afternoon at Williams Field at Jack Katz Stadium.

Princeton's Hannah Davey scored the game winner and the Tigers' fourth unanswered goal at the 65:56 mark. Both the Tigers and Blue Devils recorded 13 shots, while Princeton led in corners 9-4, including 3-0 in the overtime period.