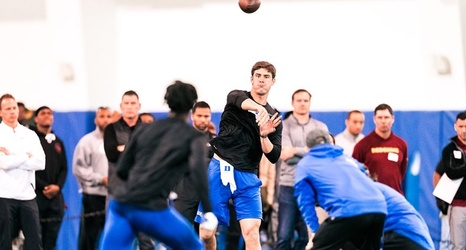 DURHAM, N.C. – Daniel Jones has become a household name after being selected as the New York Giant's starting quarterback in September.

But before he was an NFL quarterback, Jones had to prove himself in person to the professional world and he did just that during Duke's annual Pro Day on March 26, 2019.

Thirty-one NFL organizations combined to send over 60 total representatives to watch the Charlotte, N.C., native that day. He was a three-year starter for the Blue Devils from 2016-18, starting in 36 games. Jones completed 764-of-1,275 passes (.599) for 8,201 yards with 52 touchdowns and 29 interceptions during that time.