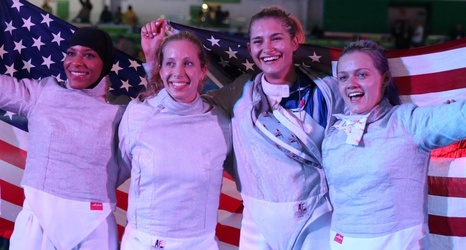 Muhammad and teammates Monica Aksamit, Dagmara Wozniak and Mariel Zagunis defeated Italy 45-30 in the third-place match to earn the first women’s medal in fencing by Americans in Rio. Muhammad outscored her Italian opponents 10-8 in the match to help the U.S. win all nine rounds.

Earlier in the day, Muhammad and Team USA topped Poland, 45-43, in the quarterfinals and nearly came back to upset Russia in the semifinals, falling 45-42.