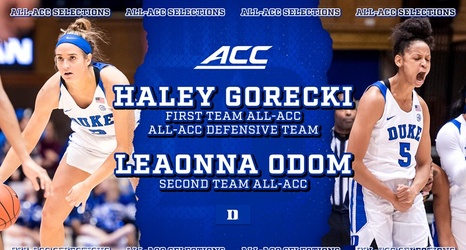 GREENSBORO, N.C. – Following the conclusion of the regular season Sunday, the ACC office announced the All-ACC teams Monday, after a vote by the Blue Ribbon Panel and the league head coaches. Duke University graduate Haley Gorecki headlined the honors earning All-ACC First Team accolades by both the Blue Ribbon Panel and ACC head coaches, while also being tabbed to the All-ACC Defensive Team by the coaches.

Senior Leaonna Odom was voted to the All-ACC Second Team for the first time in her career.