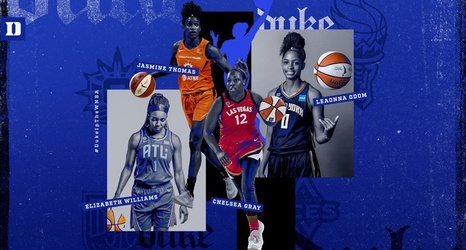 DURHAM -- As the WNBA gets set for the start of its 25th season, which launches on Friday, May 14, Duke women's basketball, like many years in the past, will be well-represented. Four former Blue Devils will be taking the stage after making it through the final cuts this week. Each of the four players compete on different teams and include: Chelsea Gray (Las Vegas Aces), Elizabeth Williams (Atlanta Dream), Jasmine Thomas (Connecticut Sun) and Leaonna Odom (New York Liberty).

Karima Christmas-Kelly is another former Blue Devil that is currently rehabbing from an injury and hopes to return for this season to help one lucky team in the pursuit of a championship.