Even On The Bench, Zion Williamson Packs A Punch 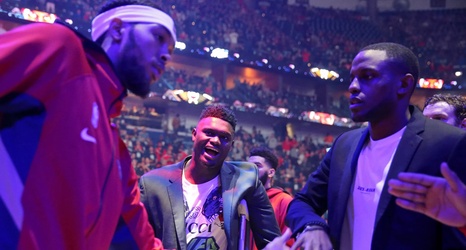 The Zion Williamson hypometer is off while he recovers from knee surgery but this is still pretty funny: he was cheering on the sidelines with fellow rookie Jaxon Hayes when Williamson spread his arms in celebration - accidentally clocking Hayes.

The video here captures it in glorious slow motion.

After he shakes it off, Hayes decides to move further down the bench.

It had occurred to us that as people test Williamson, someone may decide to push him into a fight. After watching him closely for a season, we really, really would recommend against it.