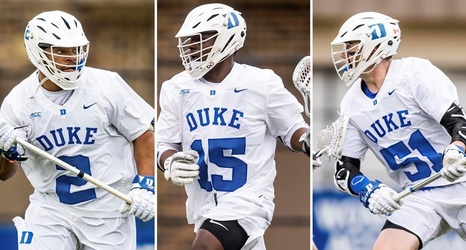 DURHAM, N.C.—The Tewaaraton Foundation announced Wednesday the 2020 trophy will not be awarded, but released its final Watch List of the best men and women's college lacrosse players. Three Blue Devils – JT Giles-Harris, Nakeie Montgomery and Dyson Williams – were among the players selected to the final list.

Giles-Harris and Montgomery were among those recognized in the first release of the watch list, while Williams was an addition March 11. Williams is the lone freshman among the 70 players honored, while Giles-Harris is one of eight defensemen listed.