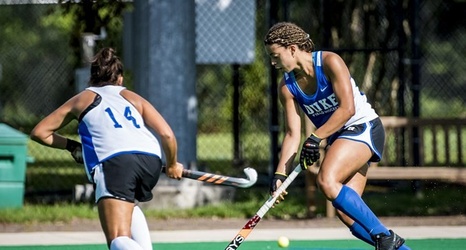 DURHAM, N.C. – After scoring her first career goal and leading Duke to its first victory of the 2020 campaign against Wake Forest on Sunday, rookie Darcy Bourne of the Duke field hockey team was tabbed the Duke Student-Athlete of the Week.

Bourne, who hails from Esher, England, found the net on a penalty shot at the 43:31 mark to notch her first career goal. Graduate student Eva Nunnink also scored in the match, logging her first goal of the season for the game winner.

"Personally, I'm happy with my performance against Wake [Forest] on Sunday, and I was so excited to get my first goal of the season along with a win," said Bourne.