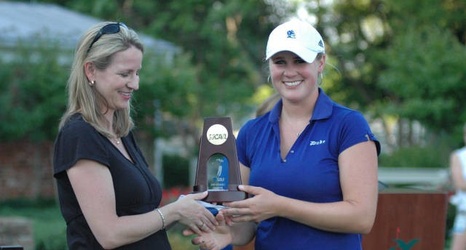 CHAPEL HILL, N.C. – After a strong start Friday in the opening round of the Ruth's Chris Tar Heel Invitational, the 12th-ranked Duke women's golf team slipped on the back nine at the 6,379-yard, par 72 Finley Golf Course in Chapel Hill, N.C.

The Blue Devils carded a five-under-par front nine that featured eight birdies and Duke led the field heading to the back nine. Duke struggled the rest of the way with an eight-over-par ledger on the final nine holes to fall to tied for ninth overall with 36 holes remaining.

Duke, the champion at the Tar Heel Invitational in five out of the last six years, posted a five-over, 293, and trails leader Wake Forest, 282, by 11 strokes.