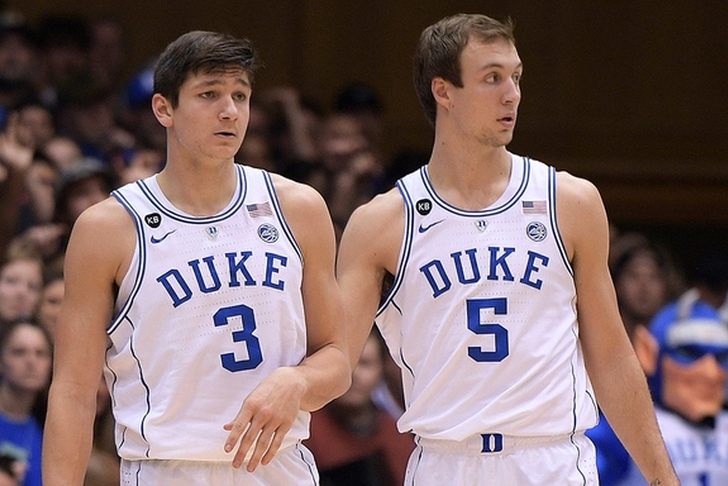 The Duke Blue Devils and North Carolina Tar Heels gave us another great chapter in this historic rivalry. In a game that featured an abundance of ties and nearly 20 lead changes, the Blue Devils walked out with the impressive 86-78 victory.

Grayson Allen was the star of the night, dropping 25 points and draining seven three-pointers - including a clutch three in the final minute -  that pushed Duke to the win. Jayson Tatum also had his best game as a member of the Blue Devils, scoring 19 points (all in the second half) with nine rebounds and five assists.

Neither team was able to gain much of an advantage in the first half as no one held a lead greater than five points, but the Blue Devils appeared to gain the momentum when Grayson Allen hit this stepback three-pointer right before the halftime buzzer. It gave Duke a 40-39 advantage going into the break.

Grayson Allen hits the DEEP stepback three to give #Duke a 40-39 lead at the half! #UNCvsDUKE pic.twitter.com/3e8ij2iShE

That momentum carried over into the start of the second half, as Duke went on a 11-4 run to build a 51-43 lead. Carolina found a way to answer, making all of their next eight shots to retake the lead.

The two sides again traded narrow leads throughout the course of the half, but the Blue Devils regained a sizable advantage, going up 77-71 with just over three minutes to play. UNC was able to cut the lead to two, then Allen essentially put the game away with this clutch three:

That three-point shooting is ultimately what gave Duke the victory. They went 13-27 from beyond the arc and shot 52.6 percent from the field. On the flip side, UNC made just four threes in the game and went just 10-18 from the free throw line.

Justin Jackson had another great game for the Tar Heels, scoring 21 points while Joel Berry II added 15. However, UNC clearly missed forward Isaiah Hicks, who was out with a hamstring injury. Carolina came into this game as the top rebounding team in the country, yet lost the rebounding battle 31-30 in this game.

North Carolina drops to 21-5 with the loss and 9-3 in the ACC, putting them into a tie for first place with Florida State. They have the weekend off before taking the court again on Wednesday at NC State.

In addition to Allen and Tatum's efforts for the Blue Devils, Luke Kennard scored 20 points and freshman Frank Jackson scored 11 points off the bench on 4-4 shooting. Duke improves to 19-5 and 7-4 in conference with the win, and have a quick turnaround before their next game. They will host Clemson on Saturday.