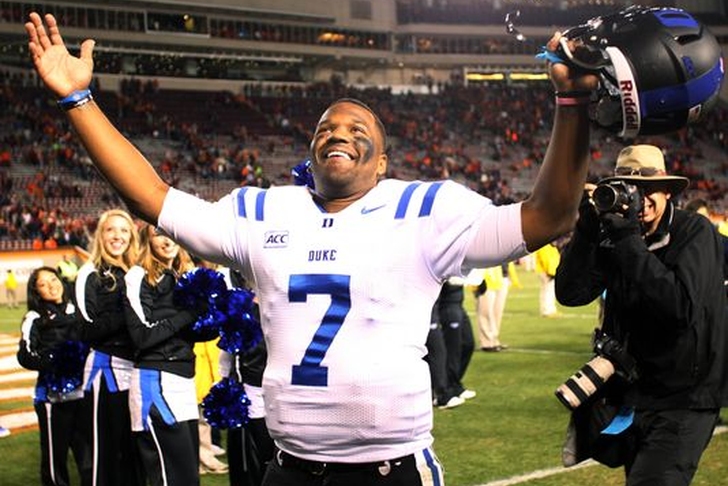 Remember back when Duke football was a joke?

It really wasn't that long ago.  Even two years ago, head coach David Cutcliffe's squad posted with a 3-9 record and won only 1 conference game, and the Blue Devils hadn't finished over .500 since the early 1990's.

Their 7-2 overall record might look impressive, but their 3-2 conference mark seems average.  Yet divisional teams Miami, Georgia Tech, and Virginia Tech also have two ACC losses, while rival UNC and newcomer Pitt both have three (Virginia has yet to win a conference game this year).

Surely powerhouses like Virginia Tech and Miami, and even a school with some football history like Georgia Tech would get the nod over Duke right?  After all, this is football we're talking about.

Well, not so fast.  Duke currently holds the tiebreaker over the Hokies after recording a sloppy 13-10 victory in Blacksburg - the Devils' first win over a ranked team in 19 years.  And Georgia Tech closes out their ACC slate this Thursday against Clemson in Death Valley, a game they will more than likely lose, giving them three conference losses.

That just leaves Miami in Duke's way. Sure enough, the Blue Devils play host to the 'Canes this Saturday.

Miami is reeling, having lost two straight blowout games to rivals Florida State and Virginia Tech after a 7-0 start and their star running back Duke Johnson for the rest of the season due to a broken ankle.  The game is also senior night at Wallace Wade Stadium, Duke's last home game of the year.

The situation for an upset is perfect, with Miami on the lowest of lows wondering how far they will slide, and Duke on the highest of highs following their 38-20 win over NC State.

So what if Duke wins? That gives the Hurricanes three conference losses, leaving the Blue Devils atop the standings with Virginia Tech waiting in the wings with two games left.

If they do, the Duke Blue Devils will be your Coastal Division champions and will face Florida State in the ACC Championship Game.  You may want to re-read that sentence.

As long as Duke beats Miami Saturday, which has now become the most important game in the program's history.