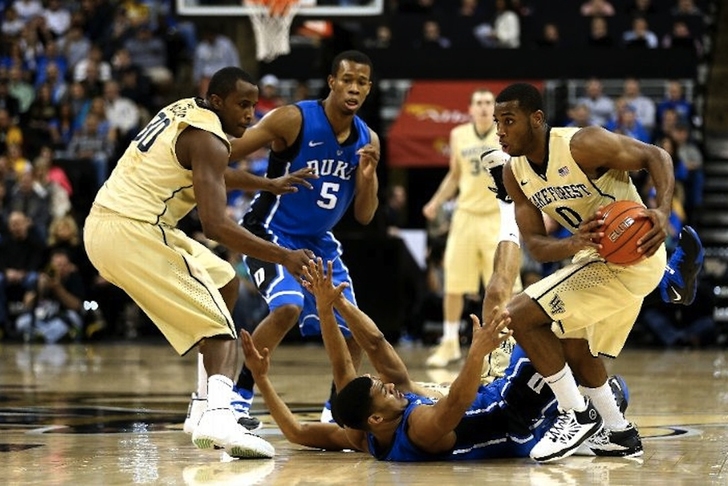 It wasn't, and the signs were there from the start.

The first half was the worst case scenario for Duke; Wake Forest jumped out to a big early lead, gaining confidence and getting the crowd into the game.

The Deacons were able to ride that confidence and maintain a steady lead throughout the opening frame, and led the Blue Devils 36-33 going into the break.

They were able to do so by playing a lot of zone defense, something that has stagnated Duke's offense in recent games and did the same tonight. The idea is to get the Devils to settle for contested, low-percentage jumpers, which is a trap Coach K's squad can easily fall into because they have so many shooters.

It worked for the Deacons, who held Duke to 12-30 shooting from the field in the half, including just 2-12 from long range.

Codi Miller-McIntyre led the way for Wake with eight points and four assists, while Coron Williams and Travis McKie each chipped in seven points.

Rodney Hood kept Duke in the game with 11 points, three rebounds, and three assists, while Quinn Cook provided a much needed spark with eight points off the bench.

The Devils got things turned around and came out strong in the second half. Thanks to a few threes from Hood and Rasheed Sulaimon and strong play from Jabari Parker, they regained a solid lead that they held for a large majority of the half.

Wake weathered the storm and managed to stay within striking distance.

Foul trouble came back to bite Duke when Parker picked up his fourth foul with five minutes left in the game. The Devils held a 66-59 lead at the time, but Plumlee and Hood also had four fouls, which caused them to play very conservatively on defense.

Parker went out of the game, and Wake took advantage of Duke's lack of an offensive post threat. They pressured the guards and forced a few turnovers, which sparked a huge 23-6 run for the Deacons as they won every facet of the game in the last five minutes.

The 82-72 win was Wake's first win over a top-five team since 2009, and fans stormed the court in full celebration mode.

Fans back in Durham, however, have a very different feeling.

The Deacons' zone allowed Duke to shoot a lot from long-range, which took Coach K's squad out of their offensive rhythm.

They settled for jumpers, and shot only 6-27 from deep (22.2%). And once their offense started centering around the perimeter, Wake Forest was able to turn up the intensity on defense, which forced Duke into 15 turnovers.

The problem for Duke—and where the concern lies for Blue Devil fans—is that this isn't anything new.

Offensive complacency was a big part of their struggles at the beginning of the ACC season, and has come back to plague them over the last two weeks.

UNC went to a zone in the second half of their matchup with Duke, and it changed the game and ultimately led to a Tar Heel victory.

Syracuse always plays a zone, but Duke was focused and was more aggressive offensively.

Seeing their struggles, Virginia Tech played a zone against the Devils as well, and that kept them in the game.

Zones would seem to be counterproductive against a team with as many good shooters as Duke, and the Devils know that. So they're taking the open threes that the zone gives them.

But in doing so, their offense becomes so complacent and they stop attacking. It stagnates the game and swings the momentum in the other team's favor when Duke starts missing shots.

The good news is this problem isn't hard to fix.

They just have to make a conscious effort to stay aggressive on offense, to keep driving and attacking the paint, and keep feeding the ball to Parker and Jefferson down low.

That's not to say Duke shouldn't shoot threes—that's a major weapon in their arsenal—but they need to take good shots that come off of penetration, rather than rely on the three-pointer as their only offensive threat.