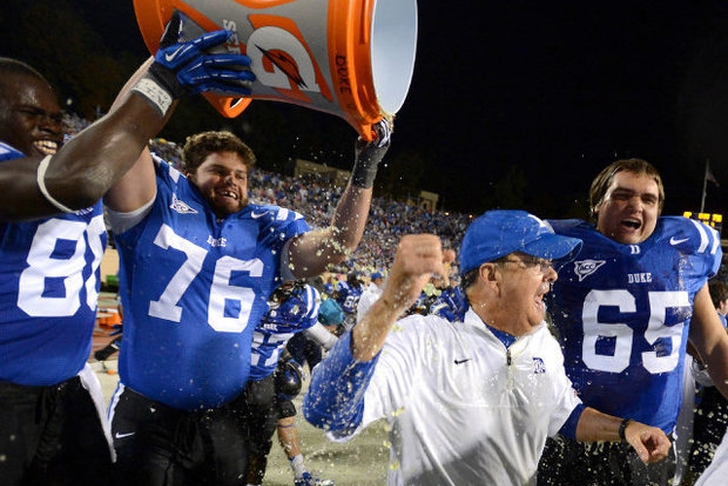 The Duke football program is easily the best it's been in 25 years since Steve Spurrier left to coach Florida.

There is become a buzz of energy surrounding the program that has seemingly never been there before. Head coach David Cutcliffe has turned Duke around, and some might say they're an up-and-coming program.

But have they peaked?

As the fabled Alex Moran points out on the TV show Blue Mountain State, "the peak" is when no matter what else happens, nothing can top it.

The way the Duke program is currently constructed, this season is as good as it's going to get.

Duke is undoubtedly a basketball school that doesn't pump much money into their football program, in part because that program doesn't pump money back to the university.  It's a simple cost-benefit analysis.

On the other hand, you can't expect a football program to be profitable when they have a 33,000 person stadium with crappy facilities that makes Duke an unwanted destination for recruits.

This is the Catch-22 university officials are dealt, with the only way to long-term improvement being to invest millions and millions into the program, but even then you're not guaranteed results.  All Blue Devil fans have to do is look down the road to Raleigh or Chapel Hill, schools that are continually mediocre even though they place a much larger financial emphasis on football, to see that.

The reason why this Duke team is breaking all sorts of school records is because they aren't hard records to top.  And that's where most of this season's excitement is coming from, fans finally enjoying a successful season after years of mockery.

Duke looks a lot like the 2013 version of the 2006 Wake Forest football team.  The Demon Deacons won the ACC Championship that season and went to the Orange Bowl with an 11-3 record.

Their stadium is roughly the same size, and their school similarly places much more emphasis on basketball and academics than on football.

Wake fans were treated to that one glorious year of success, but the school didn't make football a priority.  As a result, the Deacons have slipped back into ACC mediocrity with mere bowl bids serving as successful seasons.

2006 was Wake's peak.  Surely they will have other largely successful teams in the future, but chances are they won't be able to top what that team accomplished.

This 2013 team will be the same for Duke if serious program upgrades aren't made, but that remains to be seen.

Even if those upgrades are made, that doesn't guarantee anything for the Blue Devils, but it will give them a much better chance at maintaining the momentum this season has created and set them up with a greater chance and future success.

Relish these last few weeks Duke fans, because this could be the best it will ever be.