Duke vs. Virginia Tech Preview &amp; Predictions - Can the Hokies Make it Competitive? 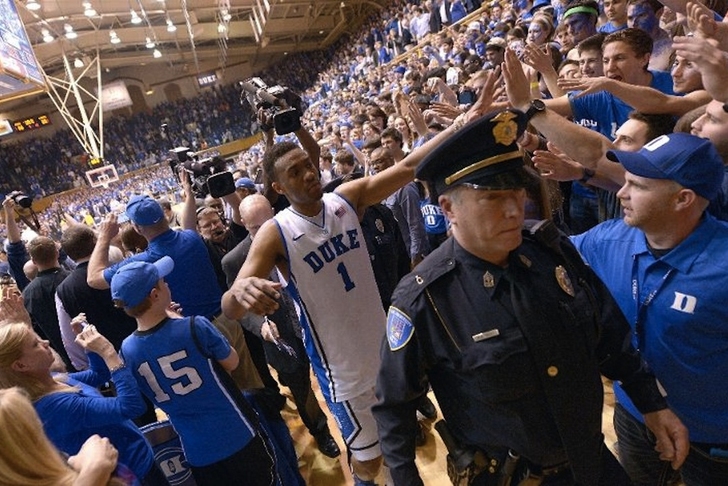 Duke is coming off of a brutal three games in five days stretch, the last of which being against UNC and Syracuse. With the last place team in the ACC coming to town, it would be easy for the Blue Devils to take it easy and not come out with their usual focus or intensity.

Virginia Tech is coming into Cameron Indoor after losing 12 of their previous 13 games. However, they've played better of late, beating Miami and taking Virginia and NC State down to the wire in their past three games.

All the Hokies have left to play for this season is a major upset, similar to Boston College's situation when went to the Carrier Dome and knocked off Syracuse.

But that's not going to happen.

The most compelling thing about this game will be to see if Tech can actually make the game compelling at any point - Duke should win this one in a major blowout.

Virginia Tech is going to come out ready to play because of the chance to pull off a major upset. Duke, however, doesn't have much to play for.

They're supposed to win this game, and easily. And coming off two mentally and physically exhausting games, no one would blame them for looking past the Hokies, especially without another game until next week.

However, the Devils did come out with a vengeance in a similar situation against Georgia Tech last week. If Coach K can get his players focused on this game, it could be over in the first couple minutes.

Duke's mindset is something that will also be affected by their level of focus. If they're engaged mentally and aggressive on offense, they'll have no problem scoring the ball against Virginia Tech's shaky defense.

But because they know they're so much better than the Hokies, it's dangerously easy for the Devils to just sit back and get complacent on offense, relying on jump shots.

This is what they did in the decisive second half against UNC where Duke really struggled on offense. And with the fatigue players might still be feeling from the tough stretch, they may not shoot the ball that well.

That combination, if it happens, is the one thing that can keep the Hokies in the game.

Prediction: Duke 79-55. It's as simple as this - Duke is one of the most talented teams in the country; Virginia Tech is, well, not. With the game in Cameron, the Devils should come out ready to play and blowout the Hokies.