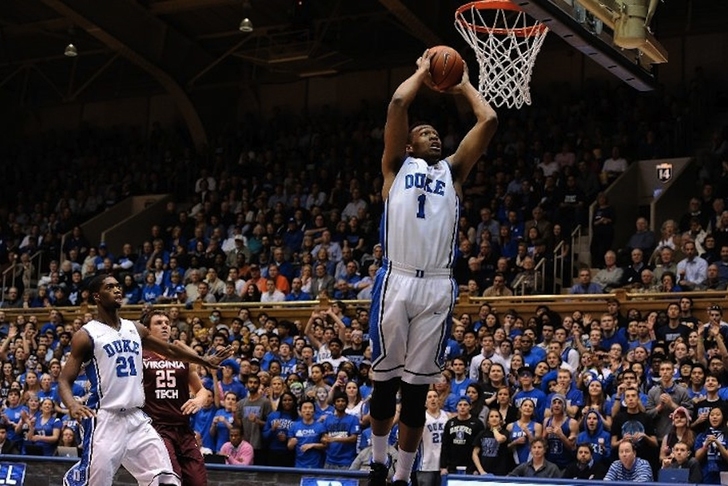 The score ended up being what it was expected to be, but how we got there wasn't.

Duke came out of the locker room on fire, and was up 24-4 in the after the first 10 minutes of the game.

Virginia Tech then took a page out of UNC's playbook, and switched to a 2-3 zone they don't normally play. As a result, the Devils got complacent and started settling for long jumpers.

Their offense became stagnated as they missed a majority of the lower percentage shots they took, allowing the Hokies to creep back in the game. Tech cut the lead to 32-20 going into the half.

Rodney Hood had a big first half for Duke, who had 12 points and three assists to pace the Devils.

C.J. Barksdale came off the bench to lead the Hokies back in the half, recording nine points on 4-4 shooting.

Virginia Tech cut the lead to nine in the opening minutes of the second frame, but Duke started attacking the zone effectively from the high post.

Coach K made the adjustment that worked against Syracuse and put Hood in the middle of Tech's zone, and he picked it apart with his ability to either shoot, drive, or pass effectively from the heart of the zone.

After that, the Devils went on a steady run and closed the game strong, finishing with the 66-48 victory.

The Devils played great team basketball and moved the ball well against the zone, having 19 assists on the 24 made field goals.

Hood was spectacular and finished with 21 points and four assists, and Rasheed Sulaimon chipped in 15 points and five assists. Tyler Thornton was also a big factor in Duke's smooth offense, totaling seven assists.

Jabari Parker played a good all-around game despite shooting struggles (3-11 from the field), recording his eighth double double (11 points, 12 rebounds) in this last 11 games to go along with three assists, three blocks, and three steals.

This was the result of the Blue Devils becoming complacent on offense due to Virginia Tech's zone. That problem has crept back into Duke's game in their past three matchups, which plagued them at the start of the ACC season when they really struggled.

Opponents will inevitably do what the Hokies did and try to play more zone than normal against the Devils because of these recent problems.

Duke is a very talented team with great athletes, great scorers, and great shooters, and they can take themselves out of rhythm offensively for extended periods of time by relying too much on being great shooters.

Teams that don't have the straight up talent to beat them—and not many teams in the country do—will try to play this way to let Duke beat themselves a little bit.

It didn't hurt the Blue Devils tonight, and it may not hurt them again for a while, but they have to play more aggressively on offense and keep their foot on the gas pedal at all times if they hope to go far in the NCAA Tournament.