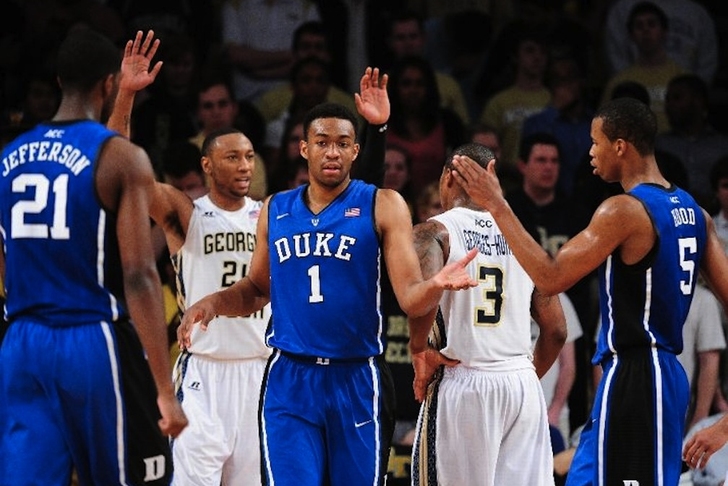 OK, there's no snow on the ground.

Can we do this for real this time?

This seems like a broken record, but Duke’s lack of size could really hurt them against a Tar Heel team that ranks sixth in the country on the boards, averaging over 41 per game.

UNC’s size up front with Meeks, McAdoo, and Brice Johnson off the bench could cause problems for the Devils, but what sets Carolina apart is their guards’ rebounding abilities. That being said, Parker leads the ACC in rebounding and Jefferson also ranks in the top five, so that should neutralize UNC’s size advantage.

We’ve also heard these same concerns in Duke’s games against Pitt, Syracuse, Florida State and Virginia, and the Devils had the rebounding edge in all but one of those games — Syracuse, where they were only outrebounded by five — so we’ll see how this plays out.

McAdoo’s probably the only guy in the conference who can match up with Parker on both ends of the floor.

Defensively, he has the size to both inhibit Parker’s shooting and handle his post game, while also being quick enough to guard him on the perimeter. However, that goes the other way as well with Parker’s ability to guard McAdoo.

UNC needs McAdoo to play well offensively to help Marcus Paige carry the scoring load, but he hasn’t always been able to do that and can struggle mightily (to put it nicely) on that end of the floor (he didn’t earn the nickname McAdoo-doo around Chapel Hill’s campus for nothing).

If McAdoo can limit Parker’s effectiveness while also playing well, he’ll give the Tar Heels a great chance to win. But if Parker makes McAdoo a total non-factor, UNC has no chance.

Prediction: Duke 82-69. UNC is now playing like the team we all thought they’d be prior to the season, but they still don’t have a pure scorer on their roster. The game should still be very entertaining, especially with Duke playing their second game in three days; I just don’t think the Tar Heels will have enough firepower to keep up with Duke offensively, especially if Parker or Hood have a big game.