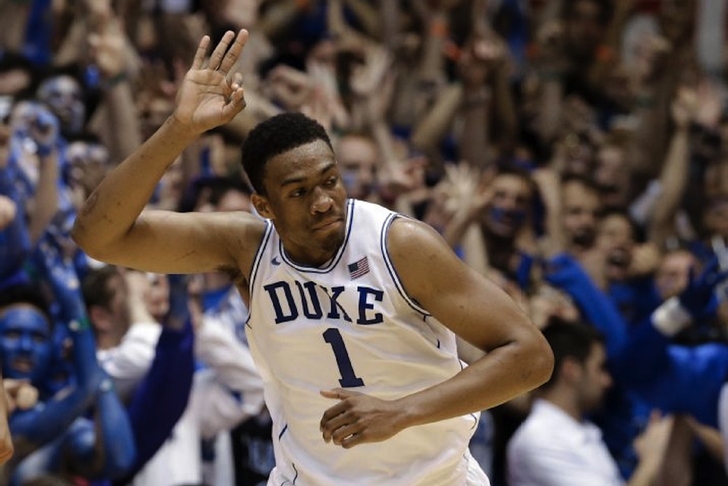 Duke got out to a hot start, riding the emotion of senior night to a big 17-4 lead in the opening minutes.

But UNC began to gradually chip away at the lead, and before you knew it we had a game again.

The Devils seemed to dominate the first half—forcing eight turnovers and outrebounding the Heels—yet only led 40-37 at halftime.

James Michael McAdoo had a big first half to lead Carolina with 11 points, but he didn't have any rebounds and picked up three fouls in the opening frame. Brice Johnson also had a great half, recording 10 points and five boards that kept the Heels weather Duke's early storm.

Jabari Parker was the story in the first twenty minutes, showing his full array of offensive skills to the tune of 16 points while also pitching in five rebounds. Rodney Hood also had a strong first half with 11 points.

Duke came out strong again in the second half, opening on a 13-4 run to build a 12 point lead just four minutes into the half. They built that lead up to 20, and cruised to the 93-81 victory.

Parker continued to be the best player on the court, finishing with 30 points and 11 rebounds in his monster night. Hood had a great game as well with 24 points, marking the first time in ACC play both of Duke's stars scored at least 20 apiece.

Marcus Paige had a strong second half to finish with 24 points for the Tar Heels, but Carolina just didn't have enough to slow down the Devils.

Coach K's squad played with the high level of intensity they usually do at home in Cameron Indoor Stadium, and they were the aggressors throughout the game.

The most telling stat of that aggression is the rebounding advantage they held over UNC, which was 34-20. To tell you how big that is, Carolina averages over 40 rebounds a game, which leads to more points and more possessions.

By reversing that into an advantage for them, Duke was able to take total control of the game.

They also broke down UNC's zone defense—the same zone that gave them so many problems in their first matchup—with ease, and seemed to break out of their three-point shooting slump in the second half.

Now, a large part of that is due to the fact that they managed to get the ball down low and in the paint and forced the defense to collapse, which allows for more open shots from deep.

That aggressiveness is what had been missing from Duke's arsenal in the past few games, and is what holds them back from playing like the team they're capable of on the offensive end.

If they can continue to play the way they did tonight in the postseason, they have the potential to make the Final Four. The Blue Devils are one of the most talented teams in the country, but they don't always play focused enough to maximize that potential.

When they do, like they did tonight, they can beat anyone in the country.