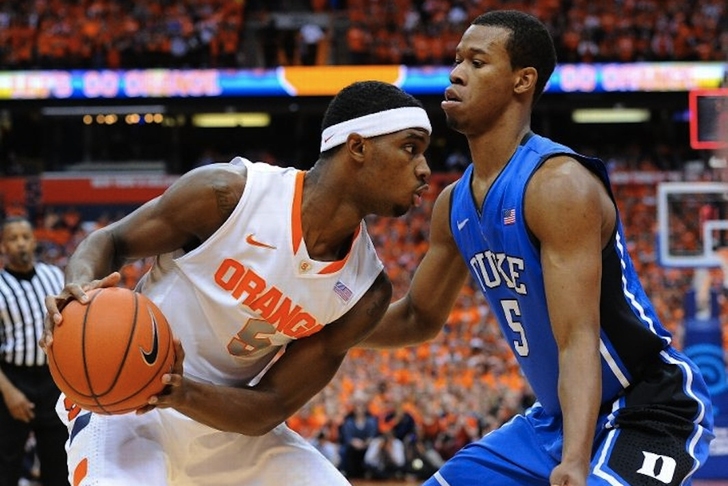 Wow. What a game.

It's extremely rare in today's media driven world for a highly anticipated matchup to live up to all the promotion and hype.

It's even rarer when a game exceeds those overblown expectations.

Yet that's exactly what Duke and Syracuse gave to sports fans everywhere tonight. The atmosphere in the Carrier Dome was electric all night, right from the opening tip.

In the opening frame, both teams battled back and forth, neither gaining much of an advantage. Duke can thank Amile Jefferson for that, who had 9 points, 4 rebounds, and 2 assists in the first half. But despite his efforts, the Orange held a 38-35 lead at the break.

The second half started much of the same, and with 11 minutes left in the second period, the Devils held a 56-54 lead.

Then the drama started.

Syracuse went on a run - and by Syracuse, I really mean C.J Fair - as the senior took over and scored eight straight points during a 12-3 run, giving the Orange a 66-59 lead.

The game seemed to be approaching the danger zone with the crowd in a frenzy and Syracuse threatening to break the game open, but three Tyler Thornton three-pointers on consecutive possessions sparked a quick 11-4 counter-run by the Blue Devils, tying the game at 70 with just under four minutes to play in regulation.

The twists and turns were just getting started.

Jabari Parker picked up his fifth foul with 1:42 remaining and his team down 73-70, and it seemed Duke was all but dead. However, Rasheed Sulaimon saved the Blue Devils, hitting a three to knot the game up at 75 with only 48 seconds left.

But then Amile Jefferson - who finished with 14 points, seven boards, and five assists - fouled out with 30 seconds left and put Syracuse center Rakeem Christmas on the line.

Christmas made one of two, and after a Duke turnover, Tyler Ennis hit both his foul shots, putting the Orange up three with just four seconds left.

That was enough time for Sulaimon, who drove the ball down the court and hit a three over two Syracuse defenders as time expired to force overtime.

Duke's three-point shooting kept giving the Devils a chance, but Syracuse was able to capitalize on Duke's foul trouble and their now massive size advantage - forward Jerami Grant had eight points in overtime alone - and held on for the 91-89 victory.

Yet for Coach K's squad, there are many positive things to take away from the loss.

They went toe-to-toe with the #2 team in the country on the road in front of a raucous crowd, and managed to do that without shooting that well for most of the game while managing severe foul trouble for much of the second half and overtime.

With that, Syracuse played their best game of the season. Fair had the game of his life, scoring 28 points, and Grant took advantage of mismatches due to Duke's foul problems to the tune of 24 points and 12 rebounds. The Orange also shot over 57%...which probably won't happen again.

Sulaimon and Andre Dawkins continued their strong play for the Devils, and Amile Jefferson has come into his own as a rebounding force.

One negative takeaway, however, has to be Parker. He finished with 15 points and nine rebounds, but shot 6-16 from the field and seemed to really be struggling for most of the night.

This is the latest example of the bigger issue, as Parker is shooting only 35% from the field over his last 10 games. Quite simply, the Blue Devils need him to be much more effecient.

And he will be. He'll break out of his slump sooner or later, and when he does, this Duke team will be one of, if not the most, dangerous team in the country.