Duke vs. Syracuse - Postgame Reactions &amp; Takeaways - The Start of a Rivalry 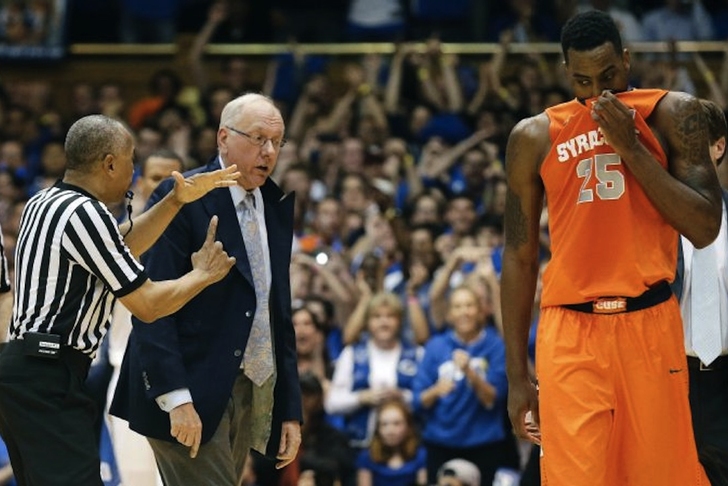 The game may not have been played at the level of their last matchup, but round two of Duke-Syrcause was every bit as close and every bit as intense.

The Orange came out strong, building a solid lead in the first five minutes of the first half, but Duke managed to gradually chip away and tied the game up at 26 going into the break.

Rodney Hood was spectacular for Duke in the first half, scoring seven points and grabbing five rebounds, but he made his biggest impact after Coach K put him in the high post against the zone. He gave Syracuse's defense fits in the middle and turned the game around.

Marshall Plumlee also came off the bench and played 15 minutes in that first half (he averages around 10 a game), and contributed four points and five rebounds, as well as a couple of big blocks. His impact was felt in more way than the stat sheet reflects, however, as his big body helped close the paint against Syracuse's drivers and stalled their offense.

The second half was much of the same back-and-forth action until a Quinn Cook three with just under eight minutes left put Duke up by six (their biggest lead of the game).

Syracuse climbed back and had a chance to win as C.J. Fair drove to the lane with a little over 10 seconds left, but Hood drew a charge that gave Duke the ball back.

More importantly, it sent Orange coach Jim Boeheim into a frenzy as he ran out onto the court screaming all sorts of words not suitable for this article, and got thrown out of the game.

Cook hit three of the four technical free throws to give Duke a 63-58 lead, essentially putting the game away as they held on for the 66-60 victory.

Jabari Parker had a big impact in the second half and finished with another double-double (19 points, 10 rebounds), while Hood finished with 13 points and seven boards.

Jerami Grant paced Syracuse with 17 points and eight rebounds, but was limited late in the game by foul trouble before fouling out at the end.

That trend plagued Duke in the first matchup between these two teams, but it affected the Orange in this one.

Rakeem Christmas and Baye-Moussa Keita, Syracuse's two big men, each had four fouls early in the second half which opened up the lane for Duke and made 'Cuse's zone less effective.

Yet it was the Blue Devils' defense that won them this game as they held the Orange to 38.7% shooting from the floor and only two made three-pointers.

They also forced Syracuse's star freshman point guard Tyler Ennis into his worst game of his collegiate career, as he only managed nine points on 2-13 shooting. He was still effective in getting the ball to his teammates, however, finishing with six assists that helped the Orange's offense stay afloat.

So these teams have now played each other twice as conference opponents, and both have been extremely intense, close games.

Duke fans really wanted to win this one after falling in the Carrier Dome, and that showed in Cameron Indoor.

Syracuse fans started selling "Beat Duke Again" t-shirts the day after the first game—safe to say, they wanted this one too.

While there may not be a lot of history behind this budding rivalry, that competitiveness between the two storied programs is already here.

The bitterness is starting to come into play earlier than expected, thanks to some questionable calls at the end of each of the two matchups.

These teams might not hate each other like Duke hates UNC or Syracuse hated Georgetown, but the intensity and pettiness between fan bases that makes up any good rivalry is already here.

We can only hope they meet again in the ACC Tournament to give us some more fireworks.