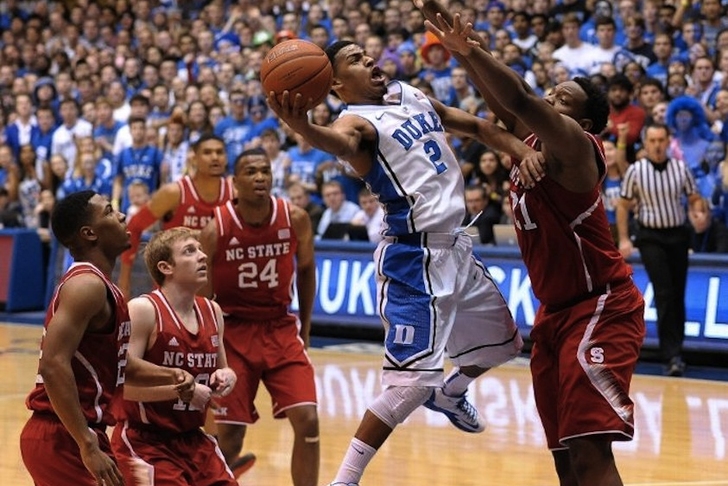 That went about as well as any Duke fan could have imagined.

The Blue Devils were hitting shots from everywhere, owning the glass, playing good defense, and Jabari Parker got back on track in their 95-60 victory over NC State.

From the start, it looked like a different Duke team from the one that has struggled in ACC play. There was a vibrant energy throughout Cameron Indoor Stadium, something Coach K's squad had been desperately missing.

Players were clapping, high-fiving, and playing with emotion. Coach K himself was more animated than usual on the sideline.

That emotion and energy greatly affected their play on the court.

They moved the ball exceptionally well on offense, recording 19 assists on 33 made field goals, including 11 from long range. That ball movement also created great shots for Duke, who shot 50% for the game.

The defense got a much needed pick-me-up as well, forcing the Wolfpack into 21 turnovers and holding them to 25% from the three-point line.

All of this is great, especially considering the way Duke has played of late, but the bottom line is that this is what was supposed to happen. Maybe not a 35-point victory, but a blowout win.

The Blue Devils had supreme talent all over the floor, and took advantage of their overmatched and overwhelmed opponent. They have slashers, passers, shooters, scorers, defenders, everything you'd want in a basketball team (with the exception of a big man rim protector, but you get what I mean).

This SHOULD be happening, especially against flawed and struggling teams like NC State.

Duke played well offensively early in the season, but they were never great defensively. And their struggles in conference play - in all areas of the game - have been well documented.

But this was the first game where they managed to put it all together. A great offensive game coupled with a stout defensive effort.

It seemed as though the Blue Devils unleashed all the frustrations that had built up from their recent struggles onto the floor, and played like a confident team with a sense of urgency - not because of a close game, but because they had a supreme desire to win.

If the Devils can keep playing like that, they might just be the best team in the country.

Parker seemed like his old spectacular self with 23 points, 7 rebounds, and 3 steals. Rasheed Sulaimon came in with 13 points off the bench. Andre Dawkins hit three from long range. Everyone contributed and played their role to perfection.

However, the game was in Cameron, where Duke has won 27 games in a row now. They still have not won on the road yet this season, which is where their struggles have come.

So has Duke turned the corner? Possibly. I think they have, but they need to prove it.

Their next game? At Miami.

Let's see if they can take this show on the road.