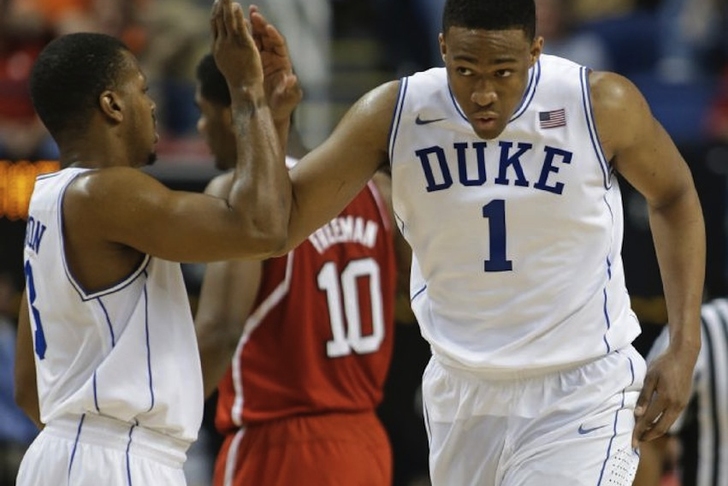 Duke pulled ahead at the start of the game, but NC State used their 68% first half shooting to pull back into it. After seemingly trading baskets for the last 10 minutes of the half, the Blue Devils held the slim 39-38 lead.

The second half continued to be close for the first few minutes before Duke went on an 11-2 run that gave them some breathing room, and maintained that lead to pull out the 75-67 victory.

Duke's defense stepped up in the second half to cool off NC State, including holding them to 2-14 shooting from three, but the Wolfpack still shot over 49% for the game.

However, the Blue Devils managed to break out of their recent slump to shoot 57% from the field, including 7-17 from long range.

Warren finished with 21 points and eight rebounds to lead State and was helped by Lennard Freeman (13 points, nine rebounds) and Anthony Barber (12 points) off the bench, but it wasn't enough.

Parker also had a great game, finishing with 20 points and eight rebounds. Rasheed Sulaimon also chipped in 16 points, and Quinn Cook got hot (3-4 from long range) for 14 points and three assists.

For NC State, their postseason hopes are very much still in question. They're squarely on the bubble, although their hot streak to close the season - winning four of their last five games, including wins over tournament bound Pitt and Syracuse - will certainly help them.

I think the Wolfpack will find a way in, likely in one of the four play-in games, but many still think NC State hasn't done enough, including ESPN's bracketologist Joe Lunardi.

Even if they don't make it, the Pack are still set up for success next year and the NIT can help them build towards that. They're an extremely young team that had lower than normal expectations, but are still pushing towards a tournament berth.

With the win, Duke advances to play Virginia in the ACC Championship Game tomorrow.

In their only previous meeting this year, the Devils held a comfortable double-digit lead for most of the game in Cameron Indoor Stadium before the Cavs went on a torrid run to take the lead with under a minute to play. Sulaimon bounced in a three that gave Duke the lead back with under 20 seconds to play, and Amile Jefferson sealed the 69-65 win with a pair of free throws.

Virginia matches up well with Duke, playing a hard-nosed, slow, grind it out style compared to the Devil's preference to get out in transition.

The first matchup was exciting, and the second will likely be as well, but will come down to whoever can dictate the tempo of the game.