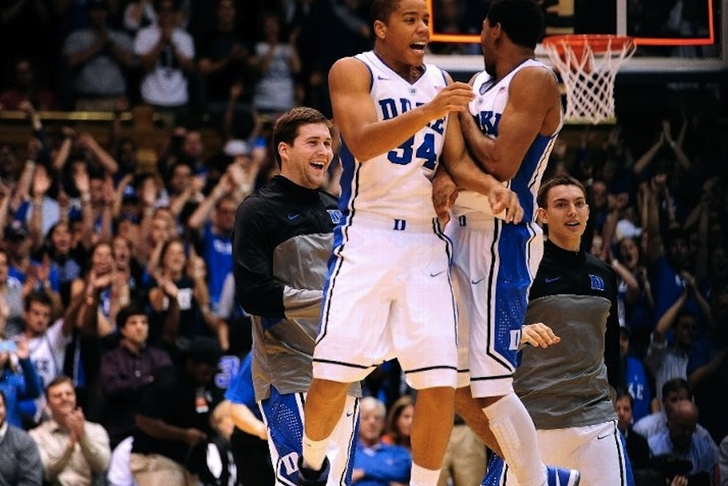 Well, it finally happened. Duke got a road win!

And it happened in the best way possible.

They went back and forth with Miami for the better part of the first half, with the Blue Devils holding a 22-19 lead with under four minutes before the break. Up until that point, the Hurricanes had controlled the game and gotten Duke to play at the slow pace that they are accustomed to.

Then, Coach K's squad turned up their intensity on defense and closed the half on an 11-2 run, capped off by two Rodney Hood dunks, giving themselves a 33-21 advantage at halftime.

Duke maintained that momentum in the opening moments of the second half and jumped out to a 42-23, forcing Miami head coach Jim Larranaga to call a timeout. The Blue Devils were able to put it on cruise control the rest of the way, recording a 67-46 victory.

The win was Duke's first true road victory of the season, which is scary considering how good this Duke team is and how it's almost February. However, the problems that had plagued them in similar situations up until this point were nonexistent.

They played tough, consistent defense throughout the course of the game, and didn't let their shooting affect their effort—positively or negatively—on the other end of the floor. Their intensity level didn't drop when they got a lead, and they were able to prevent Miami from getting back in the game.

The effort was spearheaded by Jabari Parker, who didn't look great at times, but still finished with 17 points and a career-high 15 rebounds, along with three blocks.

Parker's work on the boards signified Duke's monster performance down low, where they outrebounded Miami 42-28.

This stat is perhaps the most important to Duke's turnaround, as they have to work harder than most teams on the boards due to their lack of size. Miami isn't a team full of giants, but they have been a better rebounding team than the Blue Devils.

Duke is now doing all of the little things that we've grown accustomed to seeing from a Mike Krzyzewski coached team: effort, communication, and high levels of execution.

Now that we've seen the Blue Devils play this well two games in a row—one in an up-tempo game and one in a slower game—I think it's safe to say that this team has turned the corner and will be up with Syracuse and Pittsburgh at the top of the ACC by the end of next week.

Which is where we thought the would be—and quite frankly where they should've been—all along.