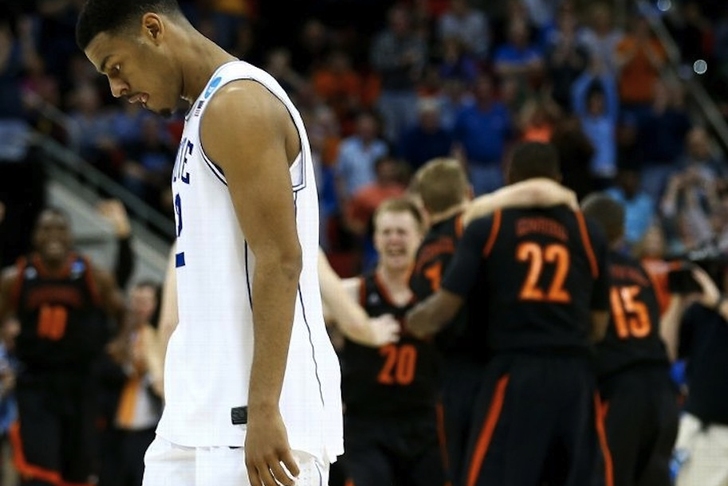 This was supposed to be the year Duke was back.

One of the nation's best players in Jabari Parker led an athletic, talented team - perhaps the most talented since the 2001 national championship team - that Coach K would obviously be able to coach into greatness.

The regular season had its ups-and-downs, but it looked like Duke figured it out.

Today was supposed to be the start of another long tournament run that showcased how great this team was.

And all of it was gone in a flash.

Mercer's balanced attack killed Duke as five players scored in double figures for the Bears, led by senior forward Jakob Gollon's 20. They shot over 55% as a team and forced 12 Duke turnovers as they pulled out the 78-71 upset.

On the other hand, the Devils shot just 35.5% from the field and were wildly inefficient. Quinn Cook (23 points) and Rasheed Sulaimon (20 points) kept Duke in the game, but the rest of the team combined for just 28 points.

Jabari Parker had 14 of those points, but was just 4-14 from the floor. Rodney Hood was also inefficient, scoring just six points on 2-10 shooting.

Duke is a team full of great shooters, but if you've been following Duke all year or been reading my articles, you know that's a weakness for them as well as being a strength.

Mercer played a zone defense for practically the whole game, as pretty much every team has against Coach K's squad at the end of the season, which allowed several opportunities for the Blue Devils to shoot from the perimeter.

This sounds like a bad idea to let shooters shoot, but as has happened all year, Duke got complacent in shooting those outside shots. But those shots are lower percentage shots, and it took them out of rhythm on offense.

Duke wasn't aggressive and gladly took those outside shots, shooting 37 of their 62 shots from long range. However, the bigger problem is that only seven (SEVEN!!!) of their total makes were from inside the arc - the rest were from long range.

The Devils were hitting them at a high rate at the beginning of the game, but they eventually cooled off. And when you're not aggressive all game, it's hard to suddenly turn it back on, which is what led to Duke going without a basket for five minutes at the end of the game when they really needed points.

What really kept Duke in the game was their offensive rebounding and second-chance points. They grabbed 16 offensive boards which created more possessions and allowed Duke to keep pace with Mercer.

The loss has drawn comparisons to when Duke fell to 15th-seeded Lehigh two years ago, but this loss is worse.

For the amazing level of talent this team is and the seemingly legitimate championship aspirations they had, they end the season with nothing to show for it.

Mercer is a very good team, but this was more than just an off game. This was the culmination of a problem we've seen from Duke throughout the year and they weren't able to fix it, and that's what's a failure.

Could there be a plus for Duke fans from all this?

Tough moment for Jabari Parker, who cried & could barely speak in the locker room. Said this game would influence his NBA draft decision.

Parker's comment on his NBA or stay decision: “I don’t know. Me and coach will talk about it. But I don’t know right now.”