Duke vs. Maryland Preview &amp; Predictions - It's Not a Rivalry! 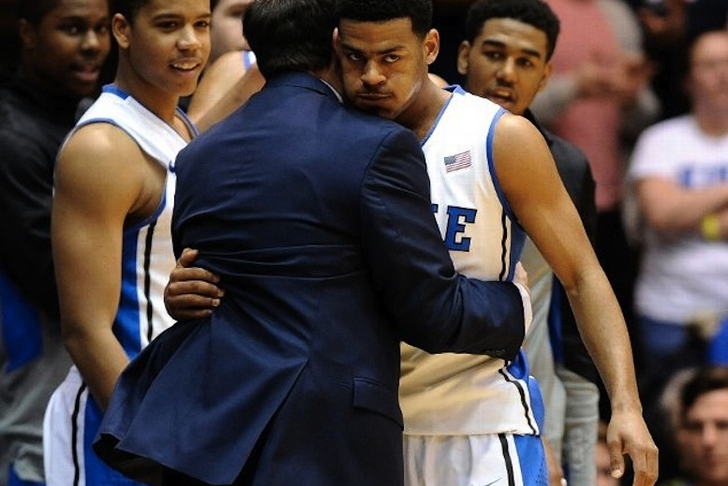 After Duke's game against UNC got postponed due to armageddon-like road conditions after only 3-4 inches of snow (c'mon Wake County, really?), the Blue Devils' only game during ESPN's Rivalry Week is against Maryland.

But the game's not a rivalry!

It was in the early 2000's in the days of Steve Blake, Juan Dixon, Chris Wilcox, and Lonny Baxter vs. Jay Williams, Mike Dunleavy, Shane Battier, and Carlos Boozer, but not anymore. Both those teams won championships (Duke in 2001, Maryland in 2002) and had some epic battles (anyone want to relive the Miracle Minute?), but the "rivalry" ended when they weren't competing for ACC titles anymore.

At least, that was the case for Duke fans.

Maryland fans, on the other hand, deeply believe that this rivalry is up there with Duke-UNC and that Blue Devils hate their guts just as much as Terps fans hate theirs, while Duke sees it as just another ACC team that wants to beat them because they're Duke.

However, the "we're not rivals, yes we are" thing has sort of made it a rivalry in a weird way. But at the same time, Terrapin fans care a LOT more about beating Duke than the Devils do.

That doesn't mean we won't be in for a fun matchup tonight, however.

Maryland's struggled early the season without their starting point guard, and his return has helped bring some added scoring and consistency to their play.

He's been on a tear lately, averaging 18.5 points over his last four games, including a 32-point outburst in the Terrapins' win over Florida State.

Allen serves as Maryland's sparkplug controlling the whole offensive and making it go, and throwing him off and causing him to have a bad game will ultimately lead to the same from his team. Look for Tyler Thornton, Duke's best perimeter defender, to be on him from the jump.

Both teams shoot the ball well from deep (Maryland 35.4%, Duke 42%), and use that as one of their primary weapons offensively.

Yet defensively, Duke ranks in the top 50 in the country, allowing their opponents to hit only 31.2% of their three-point attempts. Maryland ranks 278th in Division 1, with their opponents making 36.6% of their shots from long range.

These facts, coupled with Duke playing at home, should give the Blue Devils the advantage, but five of Maryland's top six players in the rotation are all legitimate threats from deep.

If they can get hot, they'll neutralize Duke's big advantage and be in position to pull the potential upset.

Prediction: Duke 85-72. The Devils are well rested and are on a tear, while Maryland is coming off a loss to Virginia. This is the last time they will play (in the regular season) as ACC opponents, so expect Maryland to come out thirsting for blood. However, the game's in Cameron - where Duke doesn't lose - and the Devils rank first in the country in offensive efficiency. The Terrapins just simply won't be able to keep up with Parker, Hood, & Company.