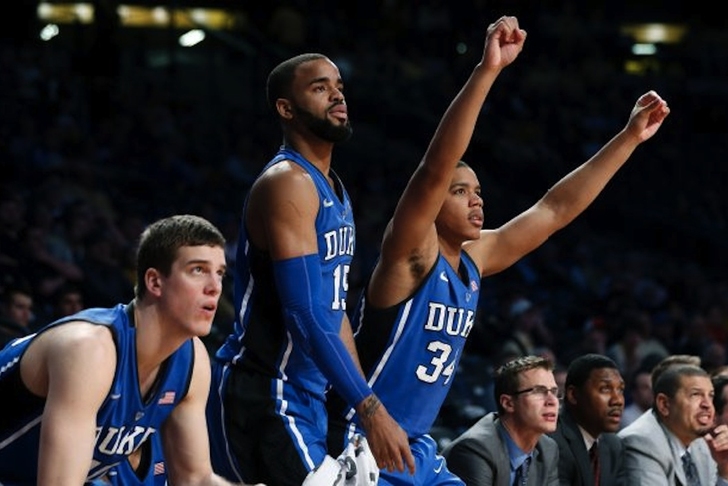 Duke came into this game knowing the opportunity was there for an easy win, and they took care of business.

They came out on fire, shooting 58.6% from the field in the first half, including a 7-11 mark from long range. The Devils also turned their defense up, forcing five Georgia Tech turnovers that led to easy baskets.

Coach K needed to manage his team's minutes in this game with huge matchups against UNC and Syracuse coming up later in the week, and he took care of that need from the opening jump.

He took advantage of the talent discrepancy between the two squads and had rotated 10 players on the court in the first five minutes of the opening frame. 11 players ended up seeing the floor as Duke jumped out to a huge 43-27 lead at the half, although the game didn't feel as close as the score indicated.

Rodney Hood set the tone for the Devils with three early three-pointers, but Jabari Parker paced the team with 10 points and eight rebounds in the first 20 minutes.

Robert Carter, Jr. kept the Yellow Jackets in the game with nine points and five rebounds, but he didn't get much help from his teammates.

Duke was able to put it on cruise control the second half and came out of Atlanta with the 68-51 win.

Parker finished with 16 points and 14 rebounds, and chipped in defensively with three blocks. Hood also helped offensively with 14 points and four threes, but shot only 5-16 from the field.

Carter, Jr. finished with 13 points and nine boards to lead the Jackets.

The best news about this game was that Duke did exactly what they came in hoping to do.

They got up big early, which allowed them to manage minutes and conserve energy for this tough stretch.

There isn't much else to really say about this game. Duke is a lot better than Georgia Tech and proved it on the court, and they made the second half boring to watch.

But this game wasn't about us basketball fans. It was about Duke getting a win and preparing for UNC and Syracuse.

And both of those games are for the fans. So I'm OK with tonight, and we all should be.