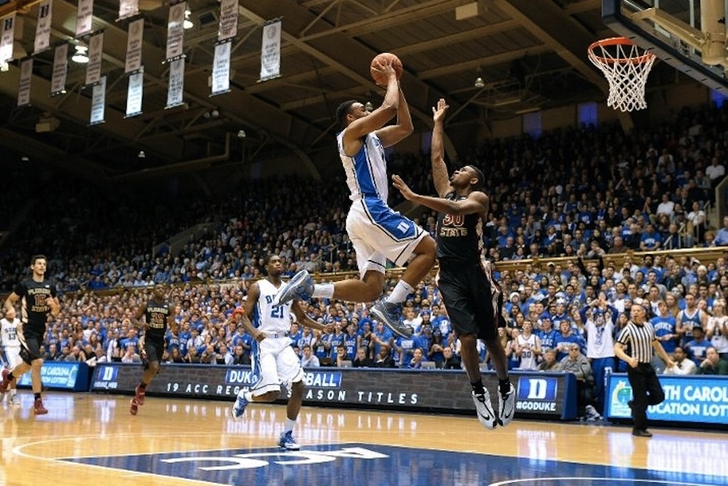 This was probably the best game Duke has played this season.

Florida State is a good basketball team, but the Blue Devils were in complete control of the game after the first ten minutes of the first half.

Rodney Hood caused a bit of drama before the opening tip, taking himself out of the starting lineup so he could go throw up in the locker room (which he apparently often does before games). He was replaced by Andre Dawkins, who sparked Duke's offense by hitting two straight threes on the Blue Devils' first three possessions.

Yet the offense from everyone else remained cold, with a lone Tyler Thornton three being the team's only other points in the first eight minutes.

With Duke struggling, Florida State took a 10-9 lead early and trailed by just two points in a 14-12 game ten minutes in.

But then the Blue Devils woke up and turned it on.

Coack K's squad closed the half on a 29-13 run, led by offensive rebounding and a barrage of threes. Seldom-used big man Marshall Plumlee sparked the run, recording four points and four rebounds during that stretch, all of which were on the offensive end.

Duke was then able to put it on cruise control and handle a few Seminole runs, holding on for the 78-56 win.

Hood led the way with 18 points and 9 rebounds, with Jabari Parker recording his second straight double-double with 14 points and 13 rebounds.

The Devils seemed to have completely turned the corner, turning what were weaknesses as little as two weeks ago into strengths over the last few games.

They were tough defensively, holding Florida State to 56 points and forcing 17 turnovers, and out rebounded the biggest team in the ACC 45-24, including 26 offensive boards.

Duke was also aggressive offensively in refusing to settle for jumpers. They got to the foul line a remarkable 43 times and converted on 34 of them.

Their home win streak in Cameron Indoor Stadium has now reached 28 games, and the Blue Devils will have to maintain this level of play and intensity. Next week, they will face the top two teams in the ACC in Pittsburgh and Syracuse, both on the road.

Coach K blamed Duke's struggles after Christmas on himself after the death of his brother, but the entire team has been much more engaged the last few weeks.

The biggest change in this team has come from their increased desire and commitment to defense, as well as Coack K's utilization of his depth and deepening of his rotation.

The Blue Devils have a roster that goes 10 or 11 deep of capable, high-level Division 1 players, and playing them all has helped keep Duke's best players fresh, in turn making them more effective.

Their defense has been able to force a lot of turnovers lately, which have led to fast break opportunities, creating the up-tempo style that Duke wants to play.

Both will be key for them next week, as we will find out if Duke is a truly great team or just a really good one.

With the way they handled the Seminoles, however, it seems as though this team is trending more towards the former than the latter.