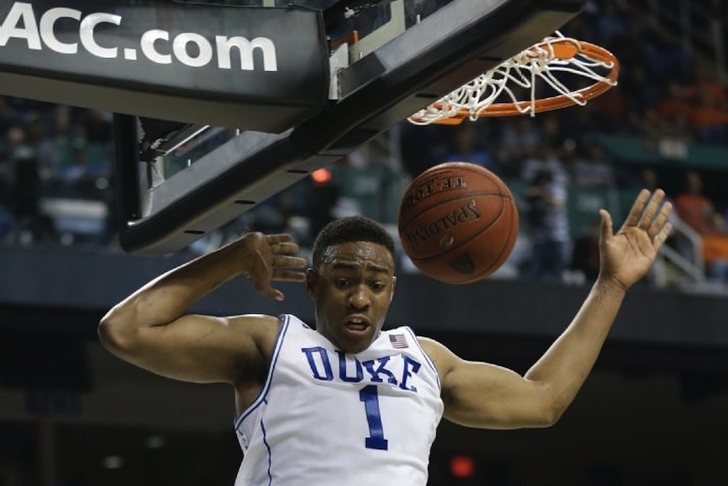 Clemson and Duke only met once during the regular season, and the Tigers pulled the 72-59 upset in Littlejohn Coliseum.

Duke turned their season around after that game, but the Blue Devils are still looking for revenge.

Meanwhile, Clemson has had their season on the shoulders of one man - ACC Defensive Player of the Year K.J. McDaniels. He does everything for the Tigers, leading them in points, rebounds, steals, blocks, and three-pointers made.

Their previous victory over Duke was their only big win of the season, but another win over the Blue Devils would put the Tigers into the NCAA Tournament conversation.

The first half of this game was really sloppy as both teams tried to find their flow on the offensive end.

The Fighting K.J.'s played their trademarked tough defense, holding Duke to 12-30 shooting from the floor, but again really struggled to score points. McDaniels couldn't do much with his strained shoulder, scoring only two points on 1-4 shooting in the half.

Luckily for them, Jordan Roper came off the bench and scored 11 straight points that put the Tigers on top 19-17 with a little under 15 minutes played.

However, Duke started to get warm at the end of the half.

Jabari Parker did not shoot well for most of the first half, shooting 3-11 in the frame, but scored six of his 10 points in the last two minutes. The Blue Devils went on a 8-2 during that span which included three big dunks as they went into halftime with the momentum and the 29-25 lead.

Duke continued their strong play into the second half and opened up a double-digit lead in the opening minutes of the second frame, but Clemson head coach Brad Brownell's decision to switch to a zone defense - something that has caused the Devils MAJOR problems this year - allowed his team to crawl back in it.

Duke started taking long, low percentage jumpers, which allowed for Clemson to rebound their misses and push the ball back up the court, resulting in some easy transition baskets for the Tigers.

A Rod Hall layup following a Duke turnover gave the Tigers a 62-61 lead with just over nine seconds left, but Rodney Hood drove the ball back down the court for Duke and drew a foul with 3.8 seconds left.

He hit both free throws, putting Duke ahead 63-62.

After a timeout, Hall got the ball and raced up the court, but Tyler Thornton knocked the ball away as the Blue Devils survived and advanced.

Parker finished with 18 points, but only had two rebounds and shot 6-17 from the field. Hood also struggled from the field (5-13), yet chipped in 17 points. Amile Jefferson really stepped up on the glass, notching 13 rebounds, including six on the offensive end.

McDaniels bounced back after his slow start, finishing with 12 points, but Hall finished with 13 to lead the Tigers.

The win means Duke will play NC State tomorrow afternoon at 3:30 p.m. with a bid to the ACC Championship on the line.

The Wolfpack are playing really well in Greensboro led by ACC Player of the Year T.J. Warren, so the Blue Devils will have to play much better defense than they did against the Tigers.

Clemson has had huge problems on offense all year, ranking 324th out of 350 Division I teams in points per game, yet Duke let them shoot over 51% from the field.

Part of it was hot shooting from the Tigers, but part was due to a lack of effort from Coach K's squad.

To top a hot, desperate team with talented players like NC State, Duke's going to have to turn up the intensity and show the killer instinct you need to put games away.

To read Brian Rauf's work on the go, make sure to check out the Chat Sports mobile app - download here!