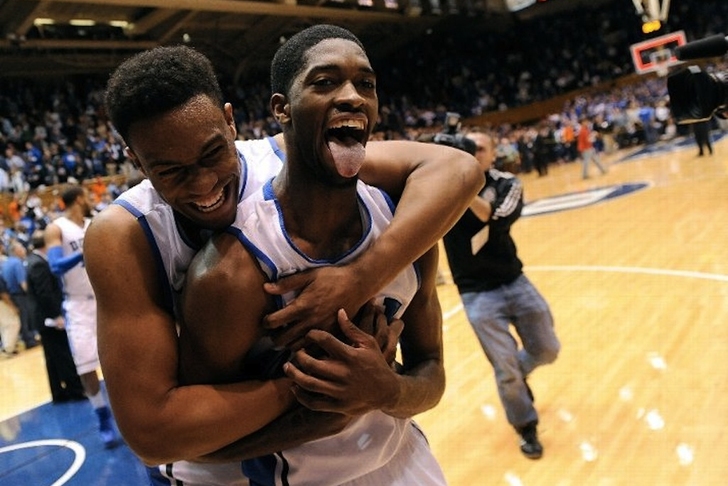 When we look back at this Duke team at the end of the year, we might say this was the week that turned their season around.

The Blue Devils were reeling, coming off another shocking road ACC loss, this time to Clemson, they had fallen to #23 in the country and were below .500 in conference play.

A matchup with Virginia, who came into the game undefeated in the ACC, was looming just two days after the loss to the Tigers, and fans were concerned if Coach K's squad had the ability to bounce back so quickly. Luckily, the game was at home in Cameron, a place where the Blue Devils hadn't lost since Florida State beat them in January 2012, while the Seminoles were on their way to their first and only ACC Championship.

For 36 minutes, Duke appeared to answer any questions doubters had about them. They played well defensively, played with intensity, and controlled the action at both ends of the floor.

Unfortunately, games are 40 minutes, not 36.

Duke had an 11-point lead with 4:22 left to play, but took their foot off the gas pedal. As a result, the Devils found themselves trailing 65-64 with 37 seconds remaining.

Yet Rasheed Sulaimon answered the prayers of Duke fans everywhere, making a three (with a little help from the rim) with 18.8 seconds left, preserving the win.

Even though they emerged victorious, there was more of a sense of relief surrounding the program than anything else. Virginia's late comeback had brought back the questions about the Devils' motivation and mental toughness.

They had the rest of the week off before facing a struggling NC State team on Saturday, and it was clear the scare against the Cavaliers woke this team up.

The Blue Devils came out with the level of emotion and intensity people had been waiting to see from Duke, as they played their best game of the season. They moved the ball well offensively, forced 21 Wolfpack turnovers, and dominated from start to finish on their way to a 95-60 blowout victory.

Even though Duke is a much better team than NC State, they played the sort of game that signified improvement and by playing up to their full potential, they showed the nation how dangerous a team they can be.

However, it remains to be seen if the Devils can maintain this momentum and play as well on the road, where they still have yet to win a game.

The big star of the week was Sulaimon, who Coach K replaced in the starting lineup with freshman Matt Jones. Sulaimon had been struggling, but the move seemed to light a fire under him, as well as the rest of the team.

He responded with 21 points against UVA, going 7-11 from the floor and 4-5 from long range, including the game winner. That effort was followed by a 13 point, 6 assist performance - off the bench again - against the Wolfpack.

The move brought energy to Duke's second unit and gave them a primary scorer, something they desperately needed, as they have really struggle to score points at times this year. It also helps Sulaimon, who doesn't have to compete for shots with Jabari Parker and Rodney Hood as much anymore, fully allowing him to play the way he wants.

Parker also got back on track against NC State, scoring 23 points with 7 rebounds and 3 steals. He had been averaging 10.8 ppg in the five previous games.

Duke's next game will be a winnable road game against Miami on Wednesday, where they will look to record their first true road victory of the season. They will also face a tough Florida State on Saturday in Cameron.

There's not much to say about Syracuse - their record pretty much tells you everything you need to know. They're stout defensively and are extremely athletic at all five positions.

Point guard Tyler Ennis has emerged as one of the best freshmen in the country, leading this team and averaging 11.9 ppg, 5.5 apg, and 2.7 spg.

They got a scare from Boston College this week, and I still have some concerns about their ability to score offensively, but they're so good everywhere else that any weakness will only hurt them against other elite teams.

This is your stereotypical Pitt team under head coach Jamie Dixon. They're big, strong, and physical, and simply try to overpower you.

Despite their loss to Syracuse, don't be surprised to see the Panthers move up in the polls. They pushed the Orange to the brink on the road, and showed that they deserve to be placed among the nation's top 15 or 20 teams.

The Tigers took care of business this past week, beating lesser opponents, but this week will really tell us how good this Clemson team is.

They already have their big home victory over Duke, but facing a tough Pitt team on the road will be perhaps their tallest task of the season to this point. They follow that with a trip to Chapel Hill, where they have NEVER won a game in 56 tries.

The game against UNC is very winnable, but they'll be going up against a lot of history. Winning both is highly unlikely, but I think if they can win one of these games, the Tigers will show they're for real in the ACC.

Virginia was this close to pulling off an incredible comeback against Duke, but shook that off and took care of business against a very good Florida State team.

The Cavaliers belong at the top of the ACC and figure to be a NCAA Tournament team, and should win both games they play this week. Their matchup with UNC should be an interesting one, but one that UVA needs to win to stay where they want to be.

The Blue Devils seemed to have turned things around, but this week will tell us for sure with two games that are winnable, but against teams very capable of pulling an upset.

Their loss to Virginia was a little disheartening for the Seminoles as they're very similar in talent and style of play, and those are games they have to win against similar opponents if they want to return to the NCAA Tournament.

They need to take care of business against Notre Dame to keep their tournament resume looking good, and chances are they won't beat Duke since the game is in Cameron Indoor Stadium. Then again, they are the last team to beat the Devils there, so you never know.

Maryland rebounded against Notre Dame after suffering an embarrassing 24-point loss to Florida State, but we still don't know how good this group really is. Those last two games are just the latest examples of the inconsistency this team has shown this season.

The Terps lost by 20 to Pitt the last time they played and will be looking to get revenge on their home court, but need to be careful not to overlook a tricky matchup on the road against a NC State team looking to get any sort of momentum going.

Wake pulled another upset over NC State, and played well in their loss to Clemson. They're proving to be a semi-dangerous team, but need to win both their matchups this week against teams in the lower third of the ACC if they want to remain in the middle of the pack in conference play.

Sophomore guard Codi Miller-McIntrye has proven to be this team's catalyst, averaging 15.3 ppg. When he plays well, the Deacons usually win - they just need him to play more consistently.

Notre Dame has now lost three straight games after beating Duke in their inaugural ACC game to teams that are a combined 5-10 in conference play. On paper, this team still looks good, but clearly haven't recovered from losing leading scorer and assistman Jerian Grant.

The Irish rank 51st in the country in scoring, but have had a ton of problems on defense during this slide. If they can't win at least one of their games next week, Notre Dame might be looking at a lost season.

The Hurricanes are starting to find themselves and come into their own this season, but still lack the depth to be really successful. They have one of the stingiest defenses in the country, giving up only 52.6 ppg to their opponents over their last seven games.

However, this week could be the week where Miami makes a statement win, getting both Duke and Syracuse at home. The Blue Devils have yet to win on the road, and the Orange only beat Miami by five at home earlier in the season.

UNC finally got their first ACC win of the year Saturday against a Boston College team in a freefall, but all is not well in Chapel Hill. They struggled to put the Eagles away, and have two more tough games this week.

Sophomore guard Marcus Paige continues to lead the Tar Heels, scoring 21 points in the win over BC, but has to get more consistent help for this team to fulfill their preseason expectations.

The Wolfpack seem to have hit their low point of the season, getting upset by Wake Forest and then getting humiliated by Duke. They have only scored 70 points twice in the past nine games, and need to find consistent scoring options outside of T.J. Warren, the ACC's leading scorer (22.2 ppg).

NC State has a chance to get their season back on track next week with two winnable home games, but they have to show some sort of fight that hasn't been there the past few games. They are a young team, but they need to grow up quickly.

Georgia Tech has lost five of their last seven games, only one of which was a single digit game. They struggle to score points, ranking 257th in the nation with 69.1 ppg, but have been giving up 70.4 ppg in their last seven.

Luckily, their two games next week are against two of the other teams in the bottom four of the conference. Unfortunately, they are both on the road and the yellow jackets will likely be underdogs in both games. Winning just one will qualify as a successful week.

Virginia Tech is, quite frankly, not very good. Senior Jarell Eddie is their best player, averaging 15.3 ppg and 5.9 rpg, but they don't have a lot of talent surrounding him.

The Hokies just have trouble scoring the ball, ranking 229th, 225th, and 245th in the country in points per game, assists per game, and field goal percentage, respectively. The problem is, they just don't have the players that can make those numbers better. Their only ACC wins this season will likely come against other teams at the bottom of the conference.

The Eagles have REALLY struggled this season, as shown by their record, but were competitive in both their games last week against superior opponents. They were beating Syracuse late in the second half before faltering late, and were neck and neck with UNC for the first 30 or 35 minutes before the Tar Heels pulled away.

Having only one game next week will give BC some much needed time to regroup, and it'll also help that the one game is against a team struggling as much as they are - and they need a win the worst way, winning only two of their last 11 games.